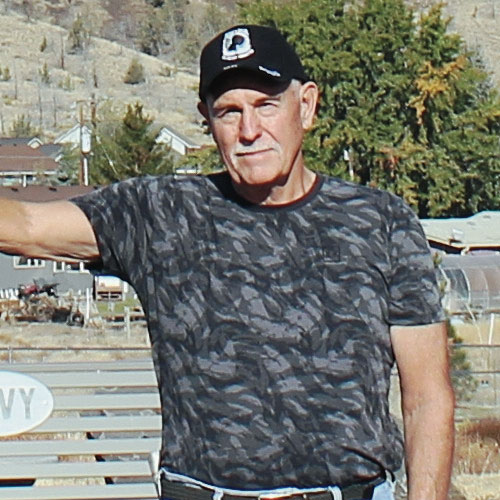 JUMPING IN TO SERVE OTHERS

As a teen growing up in Eugene, Shawn Stanfill had been bombarded daily by news about Vietnam.

By the time he was 17, he couldn’t stand what was happening and told himself, “I’m not going to miss this.” He enlisted in the U.S. Army without any apprehension.

After boot camp in 1968, he was sent to advanced training at the Armor School at Fort Knox to be an armored reconnaissance specialist.

Promoted to Buck Sergeant, he said, “I decided I would become a ‘Recondo,’ which is essentially long-range reconnaissance.”
Soon, he received orders for Vietnam.

“I was flown right out in an UH-1 helicopter and dropped in the jungle in the thick of it,” he said of his abrupt introduction to the war. He was put in charge of a 15-ton ACAV, an armored track vehicle with three machine guns and a crew of four to five soldiers.

“I was bewildered a bit, thinking ‘Something is happening here, but I don’t know what it is,’” he said, noting he knew they were in extreme danger.

“The level of controlled violence that went on was daily. The only reprieve was about every 30 days, the troop, which consisted of 23 ACAVs, had to return to base camp for three days to rebuild and replace tracks. We were the only armor asset to the 198th Infantry Brigade Americal Division.”

During that time, he was determined to be a good soldier. During his tour, he was injured in an explosion-related accident and spent several months in hospitals in Japan and the United States.

“It’s hard to imagine medical wards with perhaps 100 soldiers with horrendous injuries. It’s too graphic to explain, and civilians cannot understand,” he said.

After viewing the Mobile Vietnam Memorial this month, he said the number of soldiers who died in Vietnam and more recent wars is hard to fathom.

Stanfill, who is now a resident of Metolius in Central Oregon, said he healed himself after Vietnam by going back into the military for 23 years and reengaging with his past in a positive way.

When he became the First Sergeant of an Armor Cavalry Troop, he adopted changes he wanted to see based on his Vietnam experiences.

“No soldier would find himself just there (in battle) not knowing what’s happening. Now, they would be sponsored, nurtured and molded by every noncommissioned officer in the troop,” he said.

After that career, he worked another 20 years in Portland as a government security specialist. “So, all my hypervigilance has served the country for 50 years,” he joked.

Now retired, Stanfill said his main focus is on helping to reduce the number of veteran suicides. Currently in the U.S., 22 veterans a day commit suicide. “So many never received help. My crew in Vietnam never received help,” he said, noting they have all passed away.

To this purpose, Stanfill headed a project to build an impressive Veteran Healing Memorial in Madras, with the help of fellow veterans Craig McDonald and Fred Beebee, and funded by numerous local donors.
Located at the Jefferson County Community Center, it is a place for veterans to come and reflect, and where ceremonies honoring veterans can be held.

A circle of flags and steel benches represent each branch of the military. Two of the benches are engraved with the names of local military personnel who were killed in action, and in remembrance of others.

A wooden eagle carving has a message of hope for those struggling with thoughts of suicide, and a “shield wall” of large boulders rings the flag circle as a sign of protection. In the center, a metal fire pit bears a Band of Brothers design, in honor of World War II veterans.

This is the second healing memorial Stanfill has built, with the other located in Portland.

“There is hope, but any change has to be local. The local community and county is where you can make a difference. So, in my way, I am trying to keep it local with the Veteran Healing Memorial,” Stanfill said of his effort to prevent veteran suicides.