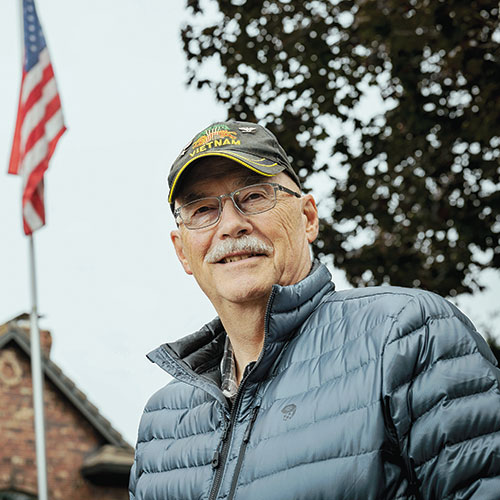 Lake Oswego resident Robert Windus wishes those with a dim view of the United States military could see through his own eyes.

While some point to wars and destruction, he sees the humanitarian work the military quietly conducts across the world and wishes it would garner as much attention. And when he visits local classrooms, he implores students to realize that the military can be a viable path toward attaining a quality education, traveling the world and making the best friends they’ve ever had.

Windus believes so strongly in these points because he’s lived it.
After serving in the Vietnam War, Windus stayed on in a leadership role in a special operation unit that conducted nation-building and disaster preparedness efforts in countries across the world. He was on active duty for over three decades.

There wasn’t a mission I wasn’t on where you look at the stars on an airplane and thank the lucky stars you live in a country like this,” Windus said.

Windus comes from a military family — both his dad and grandfather fought in the Navy in World War II and World War I respectively. Windus knew he would follow in their footsteps but wanted to join the Air Force — only to find out that color blindness dashed that goal.

Instead, he was shipped off to Vietnam in 1969 as a member of the army. Windus served a support command at the Cam Ranh base at the southeastern coast of the country.

“For a young kid coming from the Pacific Northwest, it was a cultural shock for the first few days until you get used to it,” he said.

Windus was responsible for the movement of convoys, ammunition, food and medical supplies to the front lines. He then was selected by his general, which he described as a tough taskmaster, to be his aide-de-camp.

During that time, Windus described the atmosphere as exciting at times and scary at others. After a Viet Cong attack where explosives tied to dogs blew up a jet fuel source, a piece of shrapnel came mere inches from slicing his head. He also lost part of his hearing and suffered other permanent injuries from the war.

Windus didn’t realize that his sojourn in Vietnam would turn into a long career. But once he returned to America, he said the vitriol Americans felt toward the returning soldiers prevented him from obtaining any kind of corporate job in San Francisco. He described the attitude toward returning soldiers as heartbreaking.

Instead, the Army sent Windus to graduate school, where he obtained a master’s degree in public administration. This led Windus to pursue multiple careers — working both for the U.S. Military and for the Bonneville Power Administration. Windus was in the reserve force as part of the 364th Civil Affairs Brigade in Portland and he described their mission as nation building.

Windus notes that the United States is often the country most likely to assist areas facing catastrophe. And showing the American flag in a positive light was a point of pride for him and his colleagues.

“I don’t think most people in the states realize there’s a big chunk of US military resources, personnel and equipment that go to humanitarian causes,” he said.

Even since his military service ended, Windus remained close friends with his military buddies he met 40 years ago, describing the bond between them as a brotherhood. It’s also led him to continue to do what he can to better his community, like working on initiatives to help veterans and abused children.

In reflecting on his time serving his country, Windus said that if he could, he would do it all over again.