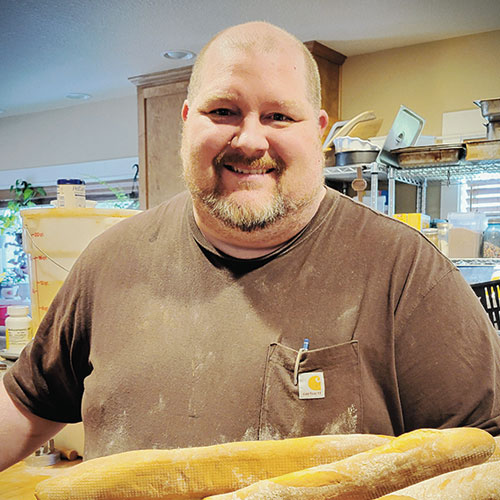 LIVING LIFE TO THE FULLEST

Robert Bragdon spent six years as a medic in the U.S. Army.

In that time, he saw people injured and killed, experienced a lifetime of personal trauma, and lived the better part of three years with the understanding that every day could be his last.

With that in mind, would he recommend it to someone considering joining?

“Absolutely,” Bragdon emphatically said. “I think it’s invaluable to be able to see a problem, know how to approach it, and come up with multiple solutions, and I don’t think that’s being built into our kids anymore. I had a little of that when I went into the military, but when I got out, it was like having a superpower.”

Bragdon, who grew up in Forest Grove and attended Forest Grove High School, now lives in Banks. He and his wife, Kristina, run Next Dimension Bakery from their home on Northwest Main Street.

“I loved the military as a kid and watched movies and read books about it throughout my childhood,” Bragdon said. “I was drawn to the brotherhood and camaraderie.”

Bragdon said he’d always worked in the medical profession as a teen. On Sept. 11, 2001, he was working in a nursing home, and as he watched with horror, he — like many — was compelled to do his part in what would become the war on terror. He chose to use his medical background as a means of helping those in the thralls of conflict.

“I just wanted to be at the max level, which I saw as emergency medicine,” he said. “I figured being on the battlefield was the max level.”

In the beginning, Bragdon said, the military’s structure fed his need for uniformity. But after he got to Iraq, he quickly found that structure compromised by the demands of combat. He was used to wrinkle-free clothes and shiny shoes. Army combat uniforms were quite a bit more casual than that.

“You could literally grab your shirt from the glove box of your vehicle and go to formation,” Bragdon said. “That didn’t suit me real well.”

He spent the next three years working as a medic and protecting superior officers as part of a crew for a Bradley Fighting Vehicle.
“While I was a medic, in the military, you’re infantry first, no matter what,” Bragdon said. “I was a commander driver as part of a personal bodyguard support team, and we were out every day.”

Driving in Iraq was a dangerous affair. There were random and continuous enemy attacks. Bragdon saw that on more than a handful of occasions when his vehicle was struck by an improvised explosive device, or IED.

Despite the obvious danger he and his brethren faced daily, Bragdon said he didn’t think about it.

“I was just doing my job,” he said. “If it’s gonna happen, it’s gonna happen. I never really feared death because it wasn’t up to me. Nobody really understood when I said that, but that’s how I saw things.”

Bragdon said he relished the moments that took him away from his grueling regular duties — at least for a time. He fondly remembered protecting a group of engineers for the better part of a week while they repaired a bridge in a remote part of Iraq. At night, hours after the daily work was done, he and his fellow soldiers were rewarded with an A-plus stargazing experience.

“It was the most incredible sight I’ve ever seen,” he said of the night sky in the desert. “I’ll never forget that. But that’s how I remember things. I have things divided up between the really good and the really awful, and I try to lean on the really good as much as possible.”

These days, Bragdon thoroughly enjoys his role as baker and co-owner of his small business in Banks. For nearly a decade, he and his wife have been working together to build a thriving business, and while at times there seems not to be enough hours in the day to meet the demand, Bragdon said there’s nothing he’d rather be doing with the life he’s fortunate to be living.

“How many people actually get to say they love what they do?” he said. “My focus is my family, and my focus is my work, and I don’t feel like I work a day in my life.”