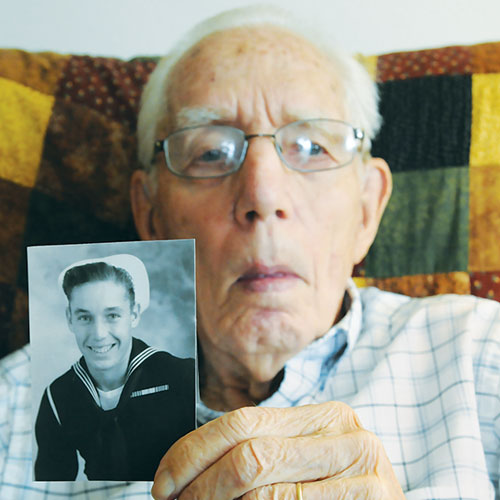 FROM PACIFIC TO PACIFIC NORTHWEST

For 94-year-old veteran Marion Wilhite, timing has been everything.
Among the last surviving veterans of World War II, Wilhite achieved the rank of seaman first class in the Navy with his service beginning in July 1945. He was just 17 at the time, and his father had to sign off when he was sworn in. Wilhite was the second-youngest of seven boys and two of his brothers also served in the military.

“We moved from South Dakota to Idaho in the spring of ’45, and I was 17,” Wilhite said, seated in an armchair in his residence at Friendsview retirement community in Newberg.

“My birthday was August, so as we neared it … I had a brother in the Air Corps and another in the Army, so when I turned 18, I knew I didn’t want to be in the infantry. The war was winding down, but there was talk about invading Japan, and so the alternative for me was the Navy. I enlisted in the Navy 30 days early, on July 7.

Although the dangers of conflict didn’t lie ahead for Wilhite as he headed off to San Diego for 10 weeks of boot camp, the challenges of military life showed up from the beginning. Among the first were the typical duties assigned to new recruits.

“I learned how to peel potatoes and clean latrines,” Wilhite said with a hearty laugh.

Wilhite and his fellow Naval servicemen also faced more serious tests.
“Because we would probably be assigned to an aircraft carrier, one of the tests we had to pass was stepping off a second-floor platform above the water,” Wilhite said.

“Some jumped willingly, others were ‘helped’ with a push … I didn’t want to, but I gritted my teeth and did it. I wasn’t around water much growing up, so I wasn’t really familiar with swimming or diving or that sort of thing.”

After a 10-day leave at his family’s new home in Idaho over Christmas and the New Year, Wilhite shipped off to Guam to complete his participation in the V-6 program (victory plus six months, or six months after the end of the war).

The trip to Guam from San Francisco was no small feat in itself.

“I don’t remember what we had for lunch that day, but me and several others had already vomited it up before we got under the Golden Gate Bridge,” Wilhite said, laughing again.

“I stayed topside with the fresh air and got along alright. There were six or eight of the guys who were laid in the floor of the head (bathroom) the whole way over.”

Once Wilhite arrived on Guam, he was assigned to shore patrol. While he characterized his experience as relatively uneventful, he remembers hearing word of Japanese soldiers hiding in the forests, unaware that the war was over and abandoned by their home country. Straying too far off the beaten path wasn’t recommended for him or any other Allied soldier.

Upon completing his service in September 1946, Wilhite got his GED diploma and moved to Newberg to attend George Fox University, then called Pacific Academy. He met his wife, Ruth, at the school. After the pair were married, Wilhite entered the workforce full-time. The couple later had two kids, Shirley and Don.

Banking was Wilhite’s industry of choice after some time working at the local post office. He worked at First Interstate in Newberg and bounced around to other branches around the state over more than 35 years.

After being married 61 years, Ruth passed away in 2009. Wilhite’s big family is filled to the brim with grandkids, great-grandkids, nieces, nephews and cousins all over the west, some of whom have heard the story of Wilhite’s service.

“The year in the Navy was good for me for I grew up and realized I wanted to continue my education,” Wilhite said.