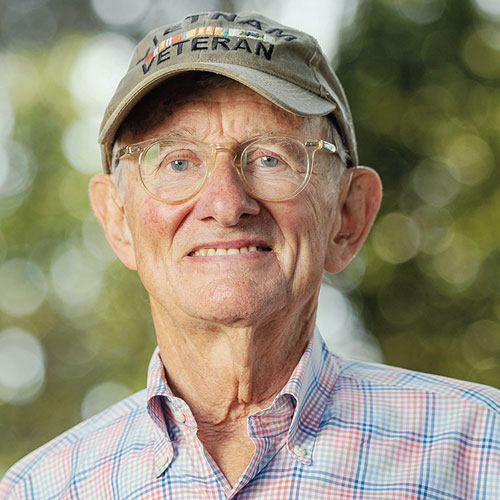 WIDE-EYED IN A WAR ZONE

Lawrence “Tige” Harris started traveling for work as a naval officer, and he didn’t stop until he got to Cornelius.

Harris, who was born in Portland and whose father was in the U.S. Army, attended high school in San Francisco and then graduated from Dartmouth College with a history degree. Before enlisting in the Navy, he tried to join the Marine Corps but failed the eye exam.

After passing naval officer school, Harris, now 81, traded a post in San Diego for one in Ethiopia. He never made it to Africa as he was assigned to the USS Chemung, an AO-30 oil tanker named after a river in New York that provided fuel to vessels in Southeast Asia.

On the boat, the lifelong guitar player was in a band with a cook who sang the blues and another sailor who sang country music.
At first, the closest fighting was a civil war in Vietnam that was readying to become one of the bloodiest conflicts of the Cold War era.

“I was 22, wasn’t married, and was intrigued by exciting places. I was just thinking, ‘Let’s go do fun stuff,” Harris said. “At first, my order was on a ship outside Vietnam fueling the destroyers. Early in the war, the shooting closest to me was the civil war in South Vietnam.”

Eventually, the United States started intervening on behalf of South Vietnam against North Vietnam, which was aligned with the Soviet Union and China.

“I didn’t so much try to go to a war. I always thought I was going to something exciting — but I knew there was some sort of a war going on.”

At the start of the U.S. entry into the conflict, the already-busy port city and vacation destination of Da Nang quickly became a landing point for thousands and thousands of Marines and home to some of the busiest airspace in the world. Everyone at the critical land, sky and sea throughway was on high alert.

“There was serious fighting then. Being on the beach, I wasn’t in the way of the fighting like the Marines, but I was armed, and there was danger,” Harris said.

Harris oversaw landing ship tanks (LST), or large shipping crates dropped from boats into the South China Sea and retrieved on the beach by amphibious forklifts. The packages helped Americans not only feed the troops but build bridges for attacks and hospitals for the wounded.

“The job of the Navy was to support the Marines. The Marines did all the fighting, and the Navy brought all the stuff ashore,” Harris said. “My job was to get all the stuff up on the beach and figure out where the hell it went, and that was pretty confusing. I did that until my three years in the Navy were up.”

Harris quipped that when he left Vietnam in 1966 as a lieutenant, his role was replaced by three men.

Back Stateside, he enrolled in business school at Stanford University, where he witnessed mass protests against U.S. involvement in the war. Harris said he understood the anti-war sentiment well but was bothered by the demonization of individual soldiers.
“The war had heated up, and there was a lot of opposition,” Harris said. “The young soldiers weren’t necessarily bad just because the war was bad.”

After graduating from business school with mediocre grades and so-so job offers, Harris borrowed some money. He sold a motorcycle to travel with his wife Peggy, buying $1,000 tickets from Pan America that would take them west around the world.

In Rome, while trying to take malaria medicine for a trip to South Africa, Peggy discovered she was pregnant, so the couple cut the retreat short and flew to New York City to rent a hotel room and job search. There, Harris began his long investment management career, taking his family to Portland, Edinburgh, England and eventually to Cornelius, where he still lives on a farm just south of town.

“No doubt we stepped out,” Harris said. “My wife is a very go-ahead person — always thinking of how to do it instead of why not to do it.”