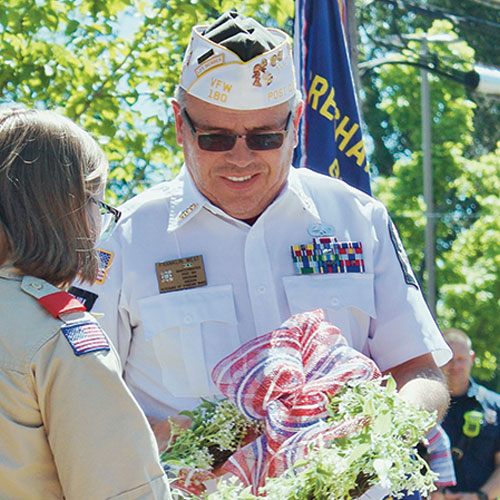 2021 Salute to Veterans - The Outlook

Franklin West enlisted as an 18-year-old unsure of what the future held. Frank was partly inspired by his dad who served with the Marine Corps in the 50s, so he joined the Air Force in 1976. Then years later another son made the same decision. Christopher West enlisted in the United States Army, also on his 18th birthday.

Frank was proud of the decision his son made. The military had been good to the now Gresham resident, offering opportunities and life experiences he never would have gotten otherwise. He so enjoyed his time in the service that he stuck with it for two decades.

“I love the military, once I got through my first four years, I knew I would make it a career, no doubt,” Frank said. “That was just like my boy.”

Retired and beginning a civilian career in East Multnomah County at the turn of the century, Frank lived vicariously through Christopher as his son began to experience many of the same joys in his own burgeoning military career. There were the ups and downs of boot camp, befriending fellow enlisted folks from across the country, and envisioning making a difference for those back home.

It was one of those random incidents that come without warning. Christopher was 23 years old and had just been promoted to staff sergeant. He was on active duty at Fort Lewis just south of Tacoma, Wash., and was awaiting deployment to Guantanamo Bay, Cuba. He was in the best shape of his life.

On a run with some peers a few miles from base, Christopher collapsed.
“They were too far out, and didn’t have a defibrillator nearby,” Frank said.

That difficult period spurred Frank toward supporting other veterans. While he had been a member of the Veterans of Foreign Wars for several years, he decided to become more active, diving into working with Gresham Post 180.

“The VFW is a resource — no veteran should face these things alone,” Frank said. “I think the work I do now with the VFW honors (Christopher). It helps me feel connected to him.”

Frank grew up in Yakima, Wash., a town known for its orchards and not much else, he joked.

“I knew I wanted to get out of there,” Frank said.

While his future was murky, Frank didn’t see college or fruit being the life for him. So he turned to the Air Force.

He completed basic at Lackland Base in Texas and began working as a machinist. His task was making sure the fighter jets were air-worthy before takeoff, repairing one- and two-engine planes.

“Our job was to figure out how to keep the planes from breaking as they got older,” Frank said. “We had to work to keep them in the air.”
Later in his career he was cross trained as a crew chief, conducting the general inspections of the aircraft.

“We called it a glorified gas station attendant,” he said with a chuckle.
The military made him a globe trotter — a few years in Southern California, a year in South Korea, time in Germany and Italy, a stint in Tampa, Florida.

After two decades with the Air Force, Frank decided to transition to a new phase in life. He retired in 1998 as a master sergeant.

“The military is family, there is this camaraderie as everybody works so close together and you have friends everywhere you go,” Frank said. “They got your back and you got theirs – you don’t find that elsewhere.”

Living in Gresham to be closer to family, Frank worked two decades for the U.S. Post Office, retiring in 2019.

And while a part of him misses the military, the VFW has provided another way to serve. Frank plans on continuing his important work helping veterans in need for the rest of his life.

“There are some veterans who come home and are forgotten about,” he said. “We have to make sure they are taken care of.”