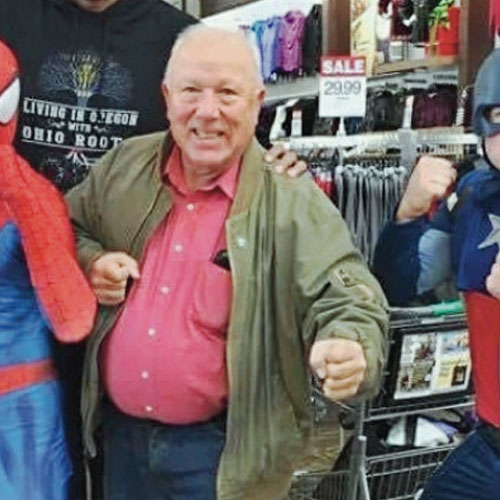 Dozens of Happy Valley veterans know and appreciate Chuck Morris because over 10 years ago he started a weekly meetup for veterans at New Seasons Market where they could share their life’s experiences over a cup of coffee.

For each veteran, their military experiences are a touchstone in their lives and who better to relate those experiences with than another veteran?

Morris grew up in the San Fernando Valley in California where he graduated from Reseda High School in 1958.

“I attended college at Los Angeles Pierce College for a few years, and the Army was getting interested in me, so I went and saw the Navy recruiter,” Morris said. “He said ‘Young man, I can fix you right up.’”

Morris joined the Navy in September 1963 during the Vietnam War. With experience in electrical engineering from college, he was an excellent fit for naval aviation. After enlisting, Morris was shipped off to the San Diego Naval Training Center for boot camp for 12 weeks. While there, President John. F. Kennedy was assassinated.

“The whole base was shook up, and guys were crying. We found out about it as it was time to go to the chow hall. The news broke out right then. It’s hard to forget, everybody was devastated,” Morris said.

After San Diego, and a brief stint in Georgia, Morris was sent to Memphis, Tennessee, where he spent one year at aviation electronic school. After returning to San Diego, Morris was transferred again in July 1965, this time to the ‘fleet at the Naval Air Station Whidbey Island, Washington.

“By the time I got there, most of the squadron was gone to Japan. I was put on a transport plane to Iwakuni, Japan, and ended up in the barracks and got a job in the evenings fixing airplanes, changing out black boxes, things like that and standing watch duty certain nights of the week. I was casing the hangar looking for trouble during watch duty,” Morris said.

As an Aviation Electronics Technician ATI, Petty Officer First Class Morris, during his second deployment in 1967, was first sent to Vietnam, where he fixed planes and electronics. While in flight, he was the radio operator.

Life was more than just an entanglement of new experiences. For many in the armed forces, it was peppered with harrowing, near-death experiences that service members are still trying to make sense of years later.

Morris remembers the night of Dec. 3, 1966, as a seminal moment when the Tan Son Nhut Air Base he was stationed at in Saigon was attacked by Viet Cong fighters.

Luckily, at the time of the attack, there were 361 Air Police on duty, which resulted in a squad at 50% strength for duty. Had the Air Police not been onsite, the outcome could have ended differently.

The Viet Cong attacked the base and penetrated the perimeter by cutting and crawling through fencing. Over the course of the attack, the U.S. forces retained control of the base, though infiltrated and suffering intense damage to both life and property.

The result was six U.S. servicemen killed in action, 19 wounded, and damage and destruction to pickups, aircraft, and police dogs. During the initial attack, Morris was returning to the base after an air patrol.

“I looked at my flight logs on the night of Dec. 3, 1966, and we were on an eight-hour patrol coming back around midnight. When we were coming in for the landing, I heard a ‘boom’ and saw a flash. Tower tells us we are under attack,” Morris said.

“We flew through a barrage. God saved us. We orbited for a while and were directed over to Bien Hoa Air Base where we landed and fueled up again. When daylight came, we were able to return. But the firefight went on for a few days.”