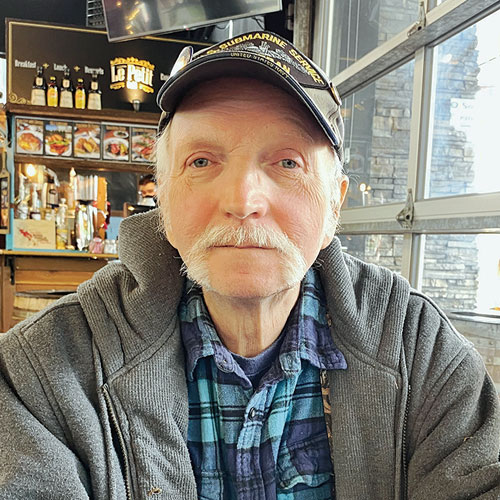 SPECIAL MAN FOR A SPECIAL SERVICE

He didn’t set out to become a submariner.

He didn’t even plan on joining the military. However, Henry Lines said he would do it all again — even after a cancer diagnosis from his time on a nuclear submarine.

Lines graduated from Westport High School in Missouri in 1968. The Vietnam War was in full motion, and Lines was given a vocational deferment for one year due to an electronics class.

“Uncle Sam was after me. I was the low number on the draft, and my number came up, so I ran and joined the Navy,” Lines said. “My father and brother had been Navy. My brother Charles served in the Korean War, and my father, John, was WWII.”

Like many young men whose draft number was imminent, Lines enlisted quickly to retain some control over his service, specifically which branch. He enlisted in November 1969 and spent 13 long weeks at basic training at the Naval Training Center San Diego and asked for transfer into submarine school.

Submarine service is not just a casual appointment. To earn sub duty, Lines completed six weeks of schooling, physical and psychological exams, air pressure tests, and even assessments to gauge his performance under duress.

“At school, I learned all about submarines, basic systems and what to expect. Then I had to do submarine escape training where the trainers had a 100-foot tower filled with water and they took me down to the 50-foot level and put me in an airlock and filled the water up to my chin. They put a hood on my head, and I did a buoyant ascent to the surface,” Lines said.

“Submarine service takes a special person. You’re screened physically and mentally. You need 20/20 vision, no glasses. They have more intelligence to be able to handle the stress of situations and many are handpicked. You just disappear from the face of the Earth for three months at a time down there.”

Lines served on seven patrols over eight years on three different submarines, including two stints in Holy Loch, Scotland, starting as a third-class petty officer. His first sub was the USS Henry Clay SSBN625 (Submersible Ship Ballistic Nuclear), where crews served on three-month cycles with a two-crew concept, blue and gold crews, with 140 men on the sub at any given time. Their missions were called deterrent patrol missions.

“Like the rest of the guys, I figured we never would start anything, but we would finish it. It was our mission to go to war,” Lines said.

“I retired from active duty in 1979. But a year later, I was sitting in my living room thinking about things, and I thought ‘I just spent eight years down the toilet’ and it seemed like a waste to leave, so I found myself right back in the recruiter’s office and joined as a reserve,” he laughed.

Not only was America involved in a difficult war in Vietnam, but the Cold War with Russia was still in effect. Lines cannot discuss much of his service details because of the sensitive nature, but suffice to say, he served on nuclear submarines that gathered intelligence information and were ready to deploy retaliatory nuclear missiles from their patrol areas.

In 1996, Lines retired permanently from the Navy as a first-class petty officer with 24 years’ service.

Due to radiation exposure on a submarine, in 2014 Lines was diagnosed with leukemia and underwent successful treatment including a bone-marrow transplant.