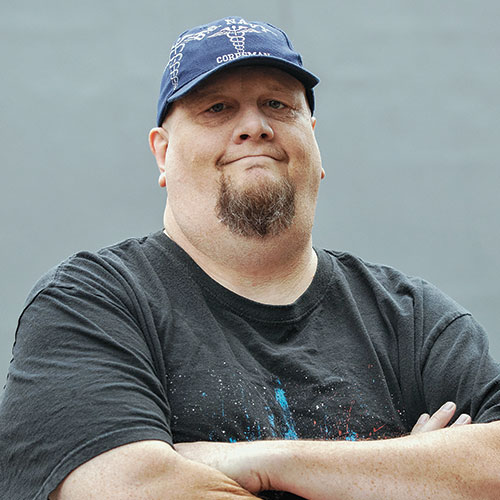 Travis Schlegel started his service arguing with a recruiter.

The junior firefighter and Banks High School student asked to be a medic, and a Marine half-joked he could carry a stretcher.

“That went on for about a half an hour, and then he finally said, ‘You need to talk to the guys down the hall,’ the Navy,” Schlegel said. “The Navy said, ‘Don’t you want to join the fleet and see the world?’ I said, ‘No, I want to be a medic.’”

Thanks to his hard work, with an assist from the G.I. Bill, Schlegel made a career as a medic while marrying into a family of sailors who built careers through skills learned in the armed forces. His father-in-law, Mike Bucholz, who lives in Forest Grove, recovered from alcoholism, then became a drug and alcohol counselor in the Navy for more than 20 years.

“I met a lot of great people who taught me a lot, and hopefully, I taught them something,” Bucholz said. “Counseling people and helping them through some of what I had been through was my career in the Navy. If there is a skill or a trade you want to pursue a lot of times, the service can help you get that experience.”

Both Schlegel and his father still wear Navy hats and swear the branch has the best food.

Schlegel, whose father was a volunteer firefighter in Banks, joined the Navy in the spring of his senior year of high school, in 1988, for four years of active duty and eight years of commitment. He jokes the Berlin Wall fell in boot camp, but peacetime didn’t last long, as the Gulf War loomed.

“I went in expecting conflict with the Soviet Union,” Schlegel said. “We had a good four months of world peace.”

He graduated from Hospital Corps School and was assigned to Bremerton Navy Hospital in Washington. He thought he would be sent to the Middle East.

Schlegel was assigned to a hospital ship bound for the Philippines, but it broke down just a few miles offshore, and he waited out the rest of his deployment in Bremerton managing ambulance service, earning a medal for coordinating the response to a training accident with multiple casualties.

“I had my bags packed, ready to go to the Philippines … but that call never came,” said Schlegel.

After his service, Schlegel returned to Banks to volunteer as a firefighter, work as a groundskeeper planting trees at the golf course and deliver pizzas.

Already an EMT, he became a fully certified paramedic in 1997 with the help of G.I. Bill funds. He started at Metro West, where he rose to senior medic and field training officer, making calls for everything from broken toes to hospice. On the side, he worked for concert promoters as a paramedic at music festivals.

I always try to have some empathy, like, ‘Hey, that’s really got to hurt.’ You can really make a difference in somebody’s life that way. Sometimes when you don’t do a damn thing with your medical equipment, that’s where you can make a difference.”

Schlegel was demoted and then fired by Metro West in 2011 while organizing an ultimately unsuccessful campaign to unionize, but court documents show the National Labor Relations Board successfully intervened and won back his title and back pay.

“The turnover was so bad,” Schlegel said. “I kept training really good people and then watching them leave right away.”

Instead of returning to Metro West, he let his license lapse and retired back home to Banks as a grandfather and stepfather.

Schlegel supports expanding the G.I. Bill and wishes there were more opportunities to serve on projects at home.