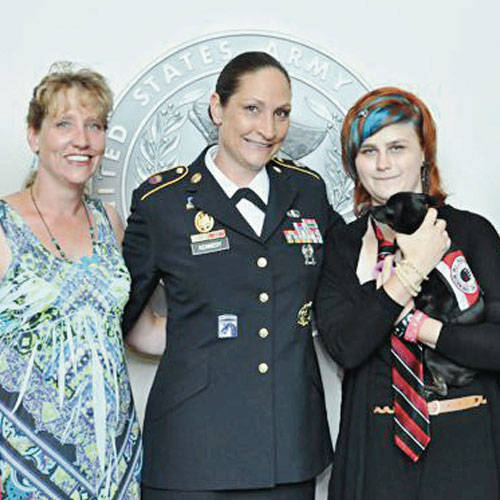 Kennedy was 12 when she first told her mother she would, and she stuck with it even after attending modeling school. Seven days after graduating from Milwaukie High School in 1992, Kennedy left for basic training at Fort Bliss in Texas.

“I wanted to do something important, and being in the military was important. I think my dad had something to do with it. He was in the National Guard,” said Kennedy, who lives in Southeast Portland.

After serving 22 years in the Army, Kennedy is still committed to military-related service, only now it is helping homeless veterans. She operates a nonprofit organization called Fort Kennedy in unincorporated Clackamas County that serves as a combination resource and advocacy center for veterans. Oregon U.S. Sen. Jeff Merkley praised Kennedy while presenting her with a U.S. flag that had flown over the Capitol at the start of a town hall meeting attended by more than 250 people at Camp Withycombe in Clackamas.

Kennedy credits her commitment to homeless veterans to her position as a First Sergeant in the army.

“First Sergeants are a soldier’s mom. We take care of their needs, listen to their concerns. I’m still doing it,” Kennedy said.
Although Kennedy mainly served in administrative positions in the army, she had plenty of adventures. Her first deployment was helping to staff several “conservation camps” set up in Central and South American countries in the early 1990s when Fidel Castro was rounding up and expelling dissidents and criminals from Cuba. Each camp held and screened hundreds of refugees at a time.

Confirmed criminals were held in jails, and the rest were processed for admission to the United States.

Kennedy said something went wrong at one center, and a young Cuban was seriously injured or died. Word spread to her center, and the refugees rioted, freed the prisoners and attacked the army staffers, who were not armed because it was a humanitarian mission.
Kennedy said she used a fire extinguisher to force a group of refugees attacking her commanding officer out of their office. She was awarded an Army Achievement Medal for her quick thinking and bravery.

“I liked the excitement and signed up for airborne school. Of the 21 women who signed up, only four of us graduated,” she said.
Kennedy became one of the first women integrated into the Special Forces as an administrator at Fort Lewis, Washington. She said it was “a blast.”

“The guys were wonderful, and they accepted me. I did 42 airborne jumps,” she said.

After serving as a recruiter for several years, Kennedy jumped at the chance to go to Iraq when the U.S. led the coalition that invaded it in 2003. She enrolled in military intelligence school and was sent to the main headquarters in Bagdad for a year.

After returning to the states, Kennedy served in numerous positions in different locations before retiring and moving to Portland in 2014. She was hired as a veterans outreach specialist by Clackamas County and spent much of her time tracking down homeless veterans, many of them living in the countryside.

“When I saw the need, I felt I had to start a program that specifically addresses the needs of homeless veterans,” Kennedy said.
Her response was to create a nonprofit. After hearing about it, the Crosspoint Northwest Auto Auction owners offered her the second floor of their large building.

“It was just one mile from where I grew up. It was one of those ‘it’s meant to happen’ moments,” Kennedy said.
The building is now owned by heavy moving company owner Terry Emmert, who continues to let Kennedy use it rent-free. The businesses on the ground floor are continuing to cover the utilities.

“It’s a great thing he’s doing by allowing us to continue there,” Kennedy said.

Fort Kennedy is located at 7600 S.E. Johnson Creek Blvd., Portland. It is open from 9 a.m. to 3 p.m. Monday, Tuesday, Thursday and Friday. Its annual gala fundraiser is Feb. 18, 2023. More information is available at online (fortkennedy.org).