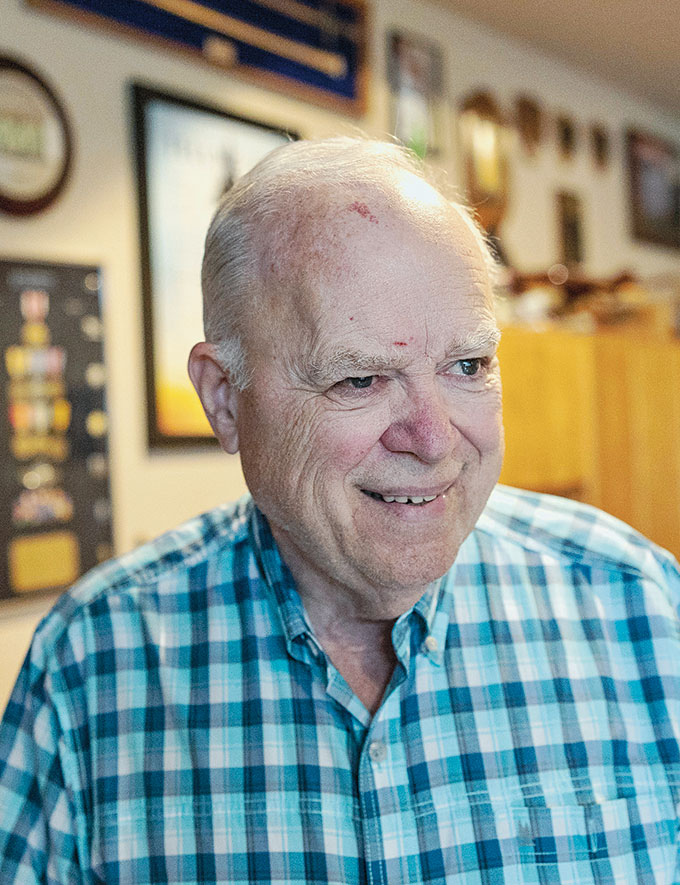 PROTECTOR OF THE FRIENDLY SKIES

More than 2 million men and women were serving in the U.S. armed forces by the early 1970s, and one thing was on nearly all their minds.

What was then the longest war in U.S. military history was dragging on in Vietnam. It had become a “meat grinder,” with foreign troops bogged down in the jungles and besieged by Communist guerrillas. Many service members feared they would never see their families again. Tens of thousands of them wouldn’t.

Mike Thomas had another reason he didn’t want to go to Vietnam.

Thomas graduated from the U.S. Air Force Academy in 1970. Like many Air Force cadets, he dreamed of being a fighter pilot — and his dream was coming true.

After completing his pilot training in 1972, Thomas was assigned to fly the F-106 Delta Dart.

One of the fastest airplanes ever built, the F-106 could travel well over twice the speed of sound and perform at an altitude twice as high as Mount Everest. It was one of just a few fighters built to carry the Genie air-to-air rocket, which could be fitted with a nuclear warhead.

“You practice shooting them all the time, but they’re unarmed, of course,” Thomas said of the nuclear-armed rocket. “They’re great to watch because they have this propellant in them, and they just smoke away from the airplane at Mach 2, plus whatever speed you’re going, so it’s a big stream of white smoke.”

The F-106 was purpose-built to fly fast, fly high, intercept Soviet bombers, and, if necessary, destroy them before they could reach their target.

What Thomas’ superiors wanted him to fly over Vietnam was, in plain terms, not that.

Thomas received his orders to deploy to Vietnam, where he would fly a spotter aircraft called the OV-10 Bronco.

An ungainly-looking twin turboprop, the OV-10 was used for observation and reconnaissance to scout the jungles of Southeast Asia, looking for guerrillas and reporting their positions. It had a top speed of less than 300 mph and didn’t typically carry much ordnance.

“Because I’d never flown ‘em, they sent me down to Phoenix to fly these T-37s,” Thomas recalled, referring to a longtime training aircraft for Air Force pilots. “I only spent a couple of months there, and I really didn’t like that. I really didn’t. I told them, ‘I don’t like this.’”

Peace accords were signed in 1973, providing for the withdrawal of American forces from Vietnam. South Vietnam held out — with dwindling U.S. support — until 1975.

With no war left to fight, Thomas’ deployment was canceled. He never went to Vietnam and never had to fly the OV-10.
“Never,” he said. “Didn’t want to.”

Instead, Thomas stuck with fighter jets. He flew with the 84th Fighter-Interceptor Squadron out of Hamilton Air Force Base, near where he had grown up in Santa Rosa, California. When he was offered the chance to transfer to the Oregon Air National Guard, flying the F-101 Voodoo — another supersonic interceptor — he accepted.

Flying out of Portland International Airport, Thomas eventually rose to the rank of squadron commander of the 123d Fighter-Interceptor Squadron. Along the way, his squadron was upgraded to the F-4 Phantom II, and later to the F-15 Eagle, which the group continues to fly.
Although he has fond memories of flying out of Hamilton AFB in his F-106, the F-15 is still — by far — Thomas’ favorite of the jets he flew, he said. He lauded its performance and advanced flight controls — although those are just part of the package.

“The radar is the main thing,” Thomas said. “You can see things so far away.”

Thomas continued to serve in the Oregon Air National Guard through the end of the Cold War. He retired in 1992 with the rank of colonel.
Like many former military pilots, Thomas began a new career as an airline pilot, working for United Airlines. But it was tough to go from flying a fighter jet to flying an airliner. After all that excitement, Thomas, who is now retired, offered one takeaway from his airline days.

“It was boring,” Thomas said.