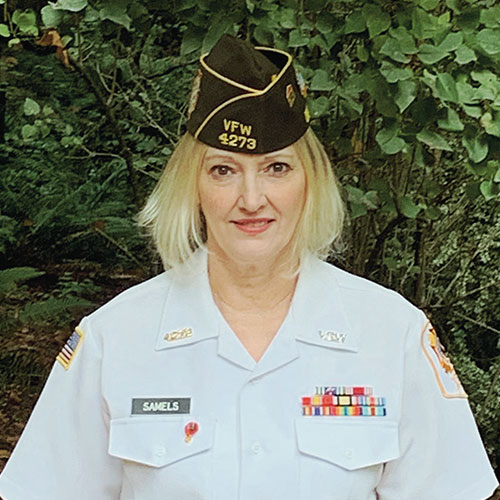 PAVING THE WAY FOR COMPATRIOTS

As a child, Melissa Samels didn’t know exactly why she wanted to join the military. She just knew she had a desire to serve her country. So, at 33, a new mother and long-time lab technician, Samels enlisted in the Army, serving first in the reserves before being called up to deploy to Iraq in 2003.

“I always wanted to serve my country,” Samels said.

Though Samels’ father served in the Air Force while she grew up in Seattle, Samels explained that she never felt pressured to join the military. Instead, her main drive was truly the appeal of giving back.

Samels, now 56, joined in 1998 and served until 2007. Despite enlisting later than most, Samels excelled in basic training and her testing. She served at Fort Carson in Colorado first, before being put on active duty in 2000.

She deployed to Iraq twice, both times leaving behind a new baby.

While she missed her family — and her sons especially — Samels was happy to serve.

Samels explained that her first and second deployments differed quite a bit despite being only two years apart.

In 2003, Samels was at the forefront of the American groundbreaking in Iraq. She was part of the first group to breach the border and pave the way for soldiers to safely enter the country and was one of the few women in her battalion.

As a heavy equipment operator, Samels helped break ground on the areas where soldiers would live for the duration of their employment and helped construct infrastructure for the Kurdish people, such as airports and landing zones.

“It was kind of cool,” Samels reminisced. “It felt good knowing the role I was playing. When I got there, there was one other girl besides me. But they treated me just like one of the guys. I appreciated the camaraderie.”

In 2005, that groundwork had already been laid, and it was a different experience.

Samels found operating heavy equipment to be a welcome change of pace and scenery from her past office work.

“It was a change from being behind a desk,” Samels explained. “It appealed to me because it just seemed interesting. I’m more of an outdoor person. I really enjoyed it.”

Her desire to be outdoors is part of why Samels settled down in Sandy, then Welches after retiring from the Army.

“I really like the area and being close to the mountain and activities,” Samels said.

Now, when she’s not hiking or otherwise taking advantage of the recreational opportunities on Mount Hood, Samels can typically be found volunteering for the Sandy Veterans of Foreign Wars post or dedicating her time to the children’s ministry at Good Shepherd Church in Boring.

Service is still very much in everything Samels does.

Through the VFW, she helps with programs in schools to teach students to care for the flag; she visits older, less mobile vets to offer companionship and aid where possible and she also served as chaplain for the post for 10 years from 2008-2018.

“I love volunteering and helping out at the VFW,” Samels said. “I enjoy the people and visiting with the older vets. Some of them don’t have a lot of family around them, and they really appreciate the company. I love hearing their stories. I enjoyed the camaraderie in the military, and we still have with the VFW.”