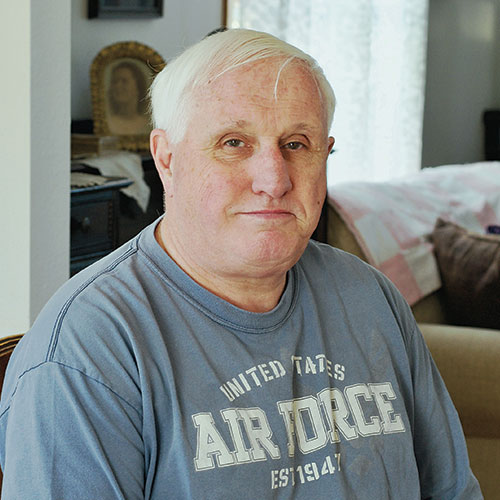 A FLIGHT OUT OF TOWN

As a teenager growing up in St. Helens, Lee Rigdon’s father encouraged him to join the military, rather than stay in St. Helens and start working in the mill or somewhere else in the small city.

“Just get out of town, out of St. Helens,” Rigdon remembers him saying. “Just do something different.”

A fan of planes, Rigdon chose the U.S. Air Force.

Yet his flight to basic training in Texas was his first-ever flight — and that was when he realized he had motion sickness. Even on a civilian aircraft, a much calmer ride than typically granted on military flights, the motion sickness was something Rigdon had to cope with.

After basic training, Rigdon deployed to Clark Air Base in the Philippines. That base was eventually closed down, accelerated by the eruption of nearby Mount Pinatubo. By that time, however, Rigdon was stationed at Hill Air Force Base in Utah.

Over 14 years, he was stationed in the Philippines, Japan, Utah and Texas, in addition to temporary assignments.

He spent four years at Misawa Air Base in Japan, during a period of expansion. “At Misawa, we built the wing from the ground up. When I first landed, we didn’t even have airplanes yet. A couple months later, we’re getting our first couple (of) aircraft.”

Though Rigdon served during peacetime, the Cold War threat of the Soviet Union and its allies was ever present.

At bases outside the United States, like Misawa Air Base in Japan and Clark Air Base in the Philippines, “you’re closer to the action, in a sense — the potential action,” Rigdon said.

He remarked, “A lot of our training was towards that goal of ‘we may have to fight World War III,’ which is a really bad scenario all the way around.”

In the early 1990s, after the Soviet Union dissolved, the U.S. military began to downsize. The country had kept the armed forces relatively small during peacetime for much of history, until World War II.

The United States had started downsizing its wartime military, Rigdon explained, until “we noticed that the Soviets had not started doing so in Eastern Europe. Europe was still unsettled.”

He added, “So we still cut back a lot, but we also realized we had to maintain a certain higher level of force than we normally would in peacetime.”

But after the end of the Cold War, military leaders decided it was time to trim down the force, particularly at the middle management level, Rigdon said.

In a five-year span, the Air Force shrank by a quarter. Rigdon left in 1992, soon after leaders began encouraging airmen to return to civilian life.

“I loved being in the Air Force,” Rigdon said. “Leaving was hard. It was very hard. But, you know, I wasn’t balancing everything out very well,” between meeting career goals and being a single father with three children. “As hard as it was, I made that decision to leave.”

Only a handful of Rigdon’s classmates in high school joined the armed forces, at a time when public opinion of the military was low following the Vietnam War, and enlistment was no longer boosted by the draft. But public perception improved over the years.

“I think there’s always some nostalgia when you look back, but honestly, I enjoyed the people I worked with. I enjoyed a lot of what I was doing. I learned a few things,” Rigdon said. “For me, for the most part, it was a good thing.”

Rigdon moved his family to Arizona for a few years after he was discharged, but he was back in St. Helens and working for the Columbia County Sheriff’s Office before the end of 1994. He’s remained in St. Helens since, marrying his wife, Martha, in 2010, and making it to 26 years working as a corrections deputy.