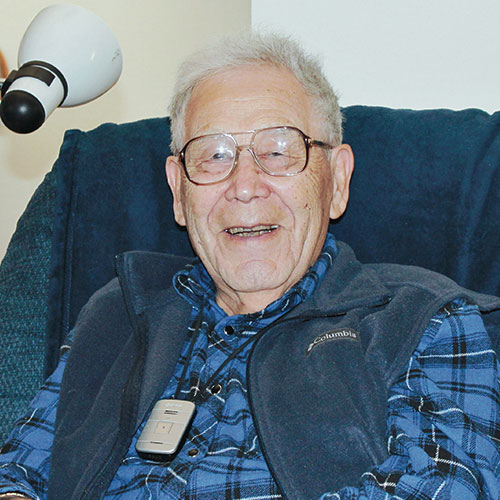 In the years after World War II, Jim Simpson didn’t talk much about his time in the Army, but the 97-year-old Alaskan Native who now lives in West Linn recently sat down to share some of his experiences.

Simpson was born in Anchorage, Alaska, in 1924. At four years old, his father could no longer take care of him and put him on a train bound for Seward, Alaska, and the Jesse Lee Home for Children, a home for displaced children operated by the Methodist Church. Simpson spent most of his childhood at the residential school that primarily served Native Alaskan children.

Only months after the United States declared war and joined World War II, Simpson graduated high school. Still only 17 and too young to join the military, the school sent him south to learn a trade.

Simpson ended up at Chemawa School outside Salem and trained as a welder. Then, he worked in Vancouver, Washington, on low-cost cargo vessels known as Liberty ships for nine months.

Following his training and having turned 18 during that time, Simpson was called to service.

He trained as an Army engineer at Camp Abbott in Central Oregon, learning to plant and remove mines, as well as build bridges.

In 1943, after his training, the Army sent Simpson to England to await his assignment in a replacement camp.

“In October 1944, I was called into service with the 44th Infantry Division, and we went to the front line,” Simpson said.

He spent 140 days on the front lines of battle, mostly in eastern France. As an engineer, Simpson’s primary responsibility was planting and removing land mines.

Amid all of this work with land mines, Simpson recalled one horrific accident.

One January morning, Simpson’s captain instructed the company to remove the land mines from a nearby tree grove, transport them somewhere safe, and set them off.

“Part of the company was told to take those mines off the back of the truck and get rid of them,” Simpson said. Early that morning, before Simpson got out of bed, there was a loud explosion.

“Every one of the mines in the back of that truck were set off accidentally,” Simpson said.

The blast killed 19 of Simpson’s fellow company men. He said the remaining members of the company believed a soldier who climbed into the back of the truck slipped, and his rifle fell and hit one of the mines.

“The truck was split in two,” Simpson said.

The unit was re-outfitted with new soldiers after the loss of those 19 men.
Simpson was on one of the first ships back to the U.S. from Europe after V-E Day and was set to prepare for war in the Pacific.

After the war, Simpson remained in Portland and stayed connected to retired staff members of the Jesse Lee Home who had relocated to the area.

Thanks to the GI Bill, Simpson attended Lewis & Clark College and obtained a degree in education. He went on to teach at the Community College of Ketchikan in Alaska, eventually retiring as the college’s director in 1980.

In the decades after the war, Simpson spoke about his time in the Army very little. Today, he said it wasn’t difficult to talk about, but at 97, it’s difficult for him to remember all the details of service.

Simpson said it was not common for World War II vets to talk about the war the way Vietnam vets did. Today, he feels, World War II is hardly talked about at all.

One of Jim’s sons, Ron Simpson, feels that people his dad’s age are truly the greatest generation.