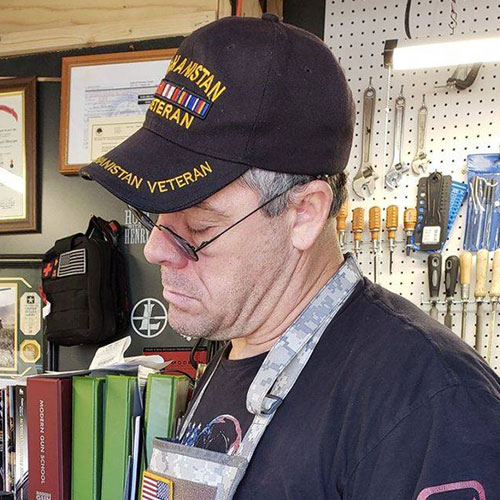 'AFTER AWHILE, YOU BECOME NUMB EMOTIONALLY'

After 17 years since he served in Afghanistan, retired 1st Sgt. James Haus still finds himself alert to smells, sounds and certain people.

“The hardest part for any veteran is coming home to basically a new environment; even then you are on high alert: looking, scanning, observing your surroundings,” Haus says.

Haus deployed for his second of three combat tours in Afghanistan from 2004-05 with a Combat Area Support Hospital. His mission was to maintain ground equipment in Bagram, Salerno and Kandahar for American, Korean and Egyptian hospital units around the country. During his time in Afghanistan, Haus flew to many parts of the country, including to some dangerous areas under constant daily attacks.

“My time there I saw and experienced combat in very different ways than what we were trained for,” he says.

“It was more urban and mountain fighting, taking its toll on your mind, body and spirit.”

After constant days of not knowing if there would be an ambush or attack coming, Haus developed coping mechanisms to keep going.

“After a while, you become numb emotionally; the days run together; you are basically on autopilot,” he says.

Like many other veterans, Haus was angry and disappointed to watch the recent U.S. exit from Afghanistan with echoes of the rushed American withdrawal from Vietnam in 1975.

“How can anyone not see how we and they — the living, the dead and the dying — have been betrayed?” he asks. “Only those who planned the exit and made the poor decisions that have cost lives and still costing lives will have to live and sleep with it and think about it constantly.”

Raised in Des Moines, Iowa, Haus joined the U.S. Army in 1987 to get out on his own and “get a special skill set.” He ended up serving for 26 years before injuries he suffered on the battlefield forced his retirement in 2014.

Haus’ first combat tour was 1990-91 during the Gulf War. As a light-wheel vehicle mechanic, Haus served as a vehicle recovery specialist, bring in broken-down or disabled equipment to a collection point for repair. His experience during the war was uncomfortable to say the least.

“A lot of times I slept in unknown locations in or on my truck, hot sweltering heat (during the day) and cold at night,”

After the ground and air war ended, Haus’ unit was called up as recovery specialists to clear the road where the U.S. Air Force decimated the fleeing Iraqi Guard. On the so-called Highway of Death, his mission was to move thousands of pieces of disabled equipment off the road from Kuwait to clear a path leading into Iraq.

“This was my first experience with the smell of death and destruction of war,” Haus says. “Many of the trucks/cars/tanks still had decomposing bodies in them or around them.”

On his last combat tour to Iraq in 2007-08, Haus was the senior maintenance supervisor in charge of more than 20 pieces of equipment. A lot of battlefield damage repairs kept the incoming teams rolling out with some of the convoys to repair vehicles at outposts or Forward Operation Bases.

“Our maintenance team worked in shifts for incoming convoys that needed any equipment needs and work,” he says.

A lifetime member of Veterans of Foreign Wars Post 1324 in Oregon City, Haus can be found with his wife, Leslie, at their home in Gladstone, where he runs a gunsmithing business called Jim’s Quick Draw. He thinks that all firearms should be well maintained so that they will be readily available if or when needed.