2021 Salute to Veterans - The Herald Pioneer 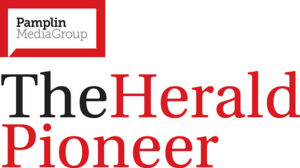 During her time at Molalla High School in the early 2000s, Erin Lefever thought she was on track to become an aeronautical engineer. She was into physics, took honors classes and seemed set to take that next step.

But finances and a desire to honor her grandfather caused a shift in those plans, a shift Lefever has found plenty of satisfaction in. Come January, she’ll be celebrating her 16th year in the U.S. Air force as a jet engine mechanic.

“During my senior year (in high school), I realized there wasn’t going to be enough scholarship money,” explained Lefever, a 2005 graduate of Molalla High.

“My grandfather had been in the Army Air Corps in the motor pool and I’d heard all these stories. So, joining the Air Force was a chance to honor my grandfather and get schooling. I knew if I didn’t go to college, the Air Force would be the next thing for me.”

She graduated in June and, thanks to delayed entry, was off to basic training the following January.

There were few women in the aircraft mechanic pipeline when she started. Now, as a quality assurance chief inspector, she oversees 20 inspectors that ensure another 1,500 “maintainers” take no shortcuts in keeping Air Force’s planes in peak condition.

But getting here hasn’t always been easy.

“(As a woman) I think I definitely faced different challenges than some of my peers did,” Lefever explained. “It is different today than it was when I joined 16 years ago. Today, people have an enormous amount of respect for each other. For two years, I was the only female senior non-commissioned officer in a group of 1,500 individuals.

“That peer group grows smaller and smaller as you stay in and gain rank and experience,” she added. “That can be its own challenge — finding people to relate those experiences with.”

When Lefever entered the Air Force, she chose the path of the aircraft mechanic. She said that she was still focused on physics and that would lead to airplanes, so taking that route of training would “give me some background in the field,” she said. “I was a bit naïve, but it reassured me that once I was done (in the service), I don’t want to do aeronautical engineering.”

Once out of basic training, Lefever went to technical training in Texas for three or four months.

“There, they give you a real basic understanding,” she said. “You get book knowledge and some hands-on, but it’s fairly basic.”

Dealing with the jet engine for the first time, there was some tearing down and rebuilding involved, but the real test came at her first duty station at Mountain Home Air Force Base in Idaho.

“That was much more on-the-job training,” Lefever said. “You get more academics and after a year of doing that you become a journeyman. Then you are out there doing the job. I don’t know if the training ever really ends. There are so many facets of the field to learn.”

And there was plenty to learn as Lefever specialized in fighter type engines, including the Air Force’s B-1 bomber that does have a fighter engine in it.

“There is so much detail in our instruction, we have a duty to check and recheck those, no matter how many times,” she said.

“I think the best part has been the people. I’m a people person, so getting to see the wide variety of people and now, the mentorship, those are things I really love. Not only being able to give mentorship, but also getting mentorship. There are so many perspectives here, we’re kind of a mini-U.S. right here in our military group.

“I try to get back to Molalla fairly often,” she said. “As much as I can.”