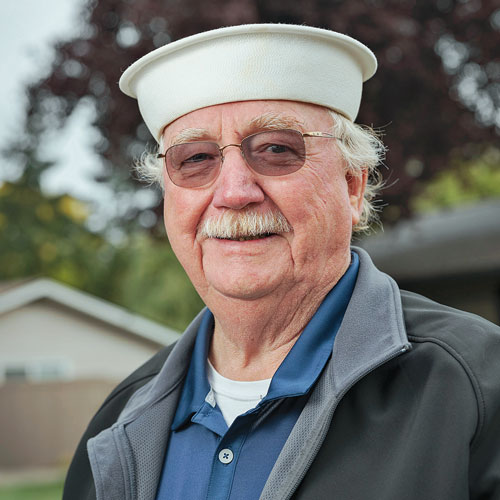 As Don Comstock remembers it, he was looking for a way to get out of the tumult he was feeling at home — and joining the U.S. Navy looked pretty appealing.

“I wasn’t doing well in school,” he recalled. “Life wasn’t doing me well, so the best thing for me to do — and I’m going to say it bluntly — (was) run away.”

Since he was only 16 years old at the time he joined the Navy, he couldn’t officially begin serving until he turned 17.

What the Navy did was created a very strict structure for his life that he appreciated.

“It was an expedition for me — all of it new,” he recalled about serving from 1962 to 1966. “My mom and stepdad set the foundation. The Navy poured the walls.”

Comstock, now 75, was assigned to a submarine tender, the USS Proteus, which was a repair ship that maintained and repaired nuclear-powered Polaris submarines that were armed with nuclear missiles.

When repairs to missiles were needed, subs would come alongside the Proteus, and the ship would lower a gantry crane to help lift parts up for repairs.
“We could pull the Polaris missiles out of the subs, put them aboard, fix them and put them back in the sub,” said Comstock. “We also did the atomic torpedoes. Those came off in a similar, but not quite the same, way.”

Polaris subs carried 16 Polaris missiles, which were about 4 feet in diameter and close to three stories tall, Comstock recalled.

After a submarine was fixed, the crew would watch it go out to the horizon, disappear, and not reappear until it was time for a crew change, about every 90 days.

Comstock said he came aboard the Proteus in Charleston, South Carolina. From there, the sub tender went to Spain before traveling to Holy Loch in Scotland, which served as a U.S. Navy ballistic missile sub base.

Comstock quickly discovered that American and Russian subs would often play hide-and-seek from each other to see how quiet they could be. They would sometimes do that in ice fields.

“When the ice was breaking off the Antarctic and floating around, they’d go hide and seek,” he said. “One of them hit an iceberg and bent their prop, so they brought the sub into Holy Loch. We had a floating drydock there. They picked it up, set it up, pulled that prop off … had another prop made and flown into Holy Loch.”

That sub was in and out in less than seven days, Comstock said.

Comstock happened to be in Key West, Florida, during the Cuban Missile Crisis.
“That’s when (Soviet Premier Nikita) Khrushchev said, ‘We’re sending missiles to Cuba,’ and the president said, ‘There will be no missiles in Cuba,’” he recalled. “Within 48 hours, there were 10,000 Marines in the Florida Keys.”

Overnight, six or seven squadrons of helicopters suddenly appeared, and the naval air station there had no more room for more aircraft.

“We were ready to go to war,” Comstock said. “I don’t know about the rest of them, but I was ready.”

But as things worked out, the conflict was resolved.

“(President John F.) Kennedy did a great job,” he said.

One aspect of his naval career that Comstock remembers fondly was his reputation for procuring items that were hard to come by when sailors visited the “geedunk” (the ship’s canteen).

“If you wanted it, you came to me, and I would work to get it,” he said.
Submariners were unique in that whatever they wanted, they got, he explained, because the last thing the military wanted was a cranky sub crew.

In recent years, Comstock became the first president of the Tualatin VFW men’s auxiliary, a group designed to help welcome home those returning from military service and provide a place for older members to find camaraderie.

He’s also played Santa Claus at the VFW over the years, visiting a variety of military groups and helped out in distributing items to low-income families.

He’s played Santa at the Portland Singing Christmas Tree as well, having participated in the annual event for more than 30 years.