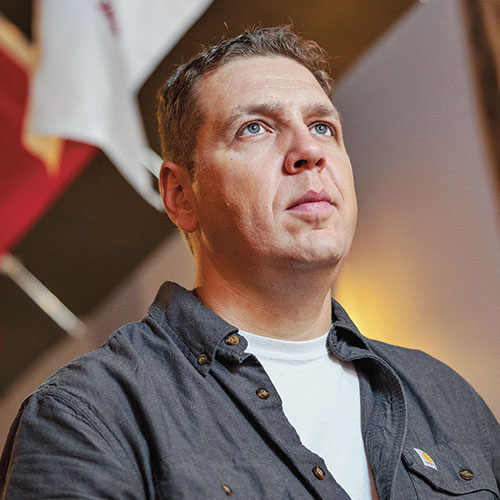 Inspired by vines grown by the French Foreign Legion, veterans in Forest Grove are planting opportunities for others after service.

Ben Martin, owner of Dauntless Wine Co. in Forest Grove, launched a nonprofit foundation during the pandemic to fund farming experience for veterans transitioning back to the workforce.

“The French Foreign Legion has their own chateau in France they built to grow wine and grapes. For me, it was the perfect proof of concept,” Martin said.

“Through grants and mentoring and work-study programs, we want to get a lot more veterans interested in farming. The media age of farmers is near 60, and nobody is replacing them. Veterans know hard work and attention to details, which is what it takes.”

Martin graduated from Forest Grove High School in 2001 and enlisted in the U.S. Marine Corps a week before the Sept. 11 attacks.

During the invasion of Iraq, with the Third Battalion of the Seventh Marines, Martin was a crewman on an amphibious assault vehicle — or, as he puts it, a dungeon master armored personnel carrier with 20 to 28 people in the back that also floats.

“Our mission was to be lightweight and, as fast as possible, move right up the middle of Mesopotamia between the Tigris and the Euphrates and get to Baghdad,” Martin said. “It was awe-inspiring for 18 and 19-year-olds.”

Martin said the successful push to the capital city quickly turned against American forces without enough support in Baghdad.

Martin recalls that former Secretary of Defense Donald Rumsfeld “referred to it as a window of opportunity to restore public services.”

He added, “We didn’t have enough guys. Things got out of hands pretty quickly. The invasion quickly unwound right before our eyes, and we couldn’t do anything. We were just holding in place. Things were being looted everywhere, but we weren’t a police force.”

After Iraq, Martin did two more deployments in Southeast Asia while based in Okinawa and working on a similar amphibious transportation vehicle, this time closer to the front. He said part of his operations included supporting Filipino troops battling against rebels in the Philippines.

“I had a unique experience. A lot of Marines my age did two or three combat deployments in Iraq and Afghanistan,” Martin said. “After I got out, I had a little bit of survivor guilt, but the other Marines say they’re jealous of what I got to do.”

Martin moved to Hillsboro after leaving the Marines in 2006 and enrolled at Portland Community College, originally to start pursuing a master’s degree in writing before switching to advertising. He worked at a now-defunct Airsoft gun store owned by his father, who also owns a glass store in Cornelius, and wrote marketing copy for web and social media.

“I didn’t care for it. I wanted to feel like I was creating something with my hands,” Martin said. “So, I decided to start a wine company.”

Dauntless Wine incorporated in December 2014, and after a few years of renting space and sourcing grapes from elsewhere, the business purchased 6.5 acres near Gaston last year. A tasting room — with walls covered in military paraphernalia — on Main Street in Forest Grove opened in spring 2019.

All of Martin’s wine associates are veterans, and the Dauntless Veteran Foundation is aimed at supporting more.

“The U.S. Department of Agriculture requires a certain amount of experience for anyone to be capable of getting a first-time farmers loan. That makes a barrier for entry for farmers loan,” said Ken Fritts, a marine veteran and board member at the foundation. “We hope our fellowship program to be a job.

Through donations, we will pay a salary to give them hands-on experimental training with a vineyard or some type of crop.”