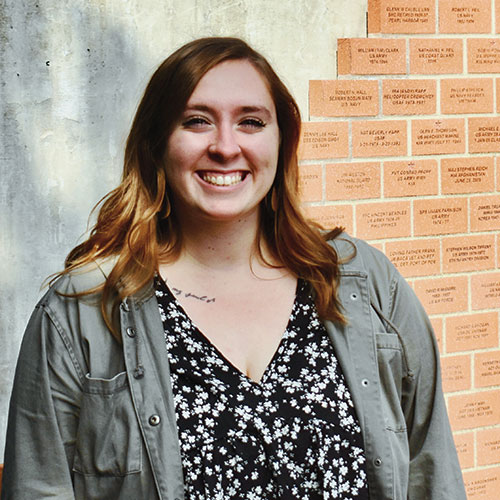 SERVING HER COUNTRY AND COMMUNITY

Aubrey Frank, a new business owner in Estacada, initially didn’t plan on joining the U.S. Navy after graduating from high school. But when she took the placement test to become a linguist, she scored the highest score out of anyone from Oregon.

At first, Frank, who plays flute, piccolo and piano, was interested in attending college for music.

“I don’t know what changed, but one day I woke up and decided I wanted to join the military,” she said, noting that her brothers have also joined the military.
After graduating from Sandy High School, Frank went on to study Arabic at the Defense Language Institute in Monterey, Calif., in 2016.

After graduating in 2018, Frank completed additional language and cryptologic training before beginning work as a linguist at Fort Gordon in Georgia.

“It was really difficult, but I loved it,” she said, adding that she often worked the swing shift.

“A lot of the job was listening. There was a lot of scanning documents and listening to audio.”

After a car accident in 2019, Frank experienced a brain injury and lost the majority of Arabic she knew. After this, she did administrative work for the Navy. Though the transition was difficult at first, she strived to maintain a positive attitude.

“I struggled for a while, but I found out who I was as a sailor. I learned how to be more of a leader than a follower,” she said.

“It was humbling. Maybe I lost what I had joined for, but it doesn’t mean I couldn’t make the best of it. At least I got to be here. Not everyone gets that opportunity.”

Frank eventually became a leading petty officer, allowing her to work with her fellow sailors. She added that she learned a lot from this experience.

“I wanted to be a compassionate leader, and make people feel like they had someone they could come to,” she said. “You realize not everybody has the same circumstances, but we’re family.”

She also became the secretary of the navy’s morale program, coordinating events like the annual Trunk-n-Treat for local families. In 2019, she was the lead coordinator for the organization’s holiday party.

“It was my commanding officer’s last party after 37 years, and he told me it was the best party he had been to in his whole career.”

This past July, Frank was medically retired. She credits her time in the Navy with giving her the structure she needed as a young adult.

“The Navy helped me grow into who I am today, get over my fears, and face challenges,” she said. “It was the best decision of my life. I felt like I needed to do something bigger than myself and contribute to something. It was the best thing I could have done for myself.”

She added that it’s difficult to believe she’s no longer in the military.
“It’s been my whole adult life. I went to boot camp a week after my eighteenth birthday,” she said.

After moving back to Oregon, she purchased the flower shop in downtown Estacada earlier this summer and gave it a new name: Country Blooms and Co. She noted that her experience with the military has helped her make decisions regarding the shop.

Though there are many differences between her work at the flower shop and her time in the Navy, Frank also sees parallels between the two.

“I love serving people. The circumstances are different, but it gives me a sense of purpose,” she said, adding that she’s enjoyed getting to know the community in Estacada.