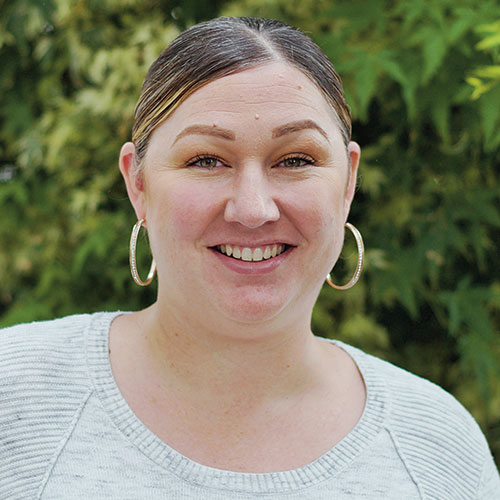 Looking for something that would force her to get her act together, 19-year-old Ashley Taylor enlisted in the army on March 18, 2003.

The next day, President George W. Bush announced the start of the Iraq War.

“At the time, we all thought that the war was going to be over and done,” Taylor said. “I remember thinking, ‘I have to go to basic training, I have to go to my school to learn how to be a diesel mechanic. The war will be way over by then.’”
But in early 2004, Taylor deployed to Iraq with the First Infantry Division.

At that time, Taylor said, “We didn’t know that their weapons of choice were roadside bombs.”

In her “love me book,” in which service members collect important documents relating to their service, Taylor has an award for most creative decorations at a chili cook-off next to a certificate awarding her a combat action badge, after a mortar shell struck next to a convoy Taylor was driving in.

“I get excited about everything,” she said. “So even though we were at war, and I was a young 21-year-old that had no clue what I was doing, I lived for the experience.”

As a teenager, Taylor had veered onto the wrong path.

“If I would have kept doing what I was doing, I would be dead or in jail right now,” she said. “I knew I needed to get away and change who I was hanging out with and what I was doing.”

But what attracted Taylor to the military is also something she believes contributes to issues she’s noticed while working in the veterans’ services field.

“What really attracted me about the military is that you didn’t have to make decisions on your own. You were told what to do, when to do it, what to wear while you’re doing it, who to do it with — you know, every detail,” Taylor said.

After she left the Army, Taylor moved to Maryland to get her degree at the recommendation of a friend stationed there, who eventually became her husband.
When her boyfriend was ready to leave the Army, the two moved to Texas, where they eventually got married and had a son. The family moved to Scappoose earlier this year, closer to both Taylor’s family in California and her husband’s family in Washington.

Taylor initially thought her career would be working with at-risk youth and families, but in Texas, she found a job working with veterans and their families.

Finding out all the services that were available to veterans — many of which weren’t widely known — was a shock.

In the military, “we’re trained to be really reactive to the orders that are given to us,” Taylor said. But as a veteran seeking services, “you have to be proactive, you have to advocate for yourself.”

In 2019, Taylor began working for the Lone Survivor Foundation, which hosts programs for combat veterans to “introduce them to different therapeutic tools to help with PTSD, mild traumatic brain injury and chronic pain.”

Just one in 10 veterans are women. Women made up an even smaller fraction of Taylor’s platoon of diesel mechanics.

“We constantly had to prove ourselves,” Taylor said.

With groups like Veterans of Foreign Wars, she added, “it’s always assumed that I’m not a veteran, especially since my husband is a veteran.”

Taylor said, “I don’t know what a veteran looks like, but I definitely get that I ‘don’t look like a veteran’ a lot.”

Taylor’s “love me book” is both proof, ready to show if someone doubts her service, and a scrapbook.

Every form and certificate is a reminder of her accomplishments, confirmation that it all really happened.

“Maybe it’s a big deal to me, because I feel like I always have to prove it. But I love that it’s all in one place,” Taylor said. “This is such a big historical thing, and I’m so proud of my service.”