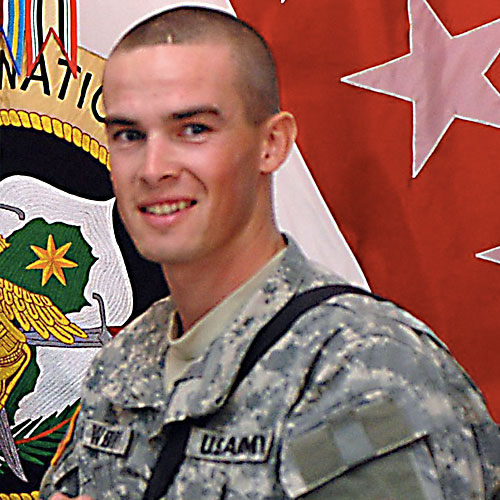 Behind every frontline of combat soldiers, there are crews of men and women dedicated to keeping those soldiers safe.

Sandy’s Virgil Newberry, 36, was one of those people in the U.S. Army in Iraq.
Newberry served with the Army as an active duty carpenter in vertical construction for eight years. He enlisted at the age of 20 after a friend encouraged him to join.

“My grandpa was in the Army, so it made it that much easier,” Newberry said. “I didn’t (anticipate) being in the military in high school. I thought I’d be a history teacher. I had a friend join up and ask me, and I was working a dead-end job, so I said, ‘Sure.’”

Newberry’s uncle, father, and grandfathers all served in the military, too, but he said none of them pushed him to enlist.

Newberry was deployed to Iraq several times between 2005 when he completed basic training, and July of 2013, when he left active duty to serve in the Oregon Army National Guard. During that time, he helped build roads, offices and helipads, as well as fix roads to get soldiers to their destinations safely.

“(Enemy soldiers) would try to hide bombs in potholes, so it was our job to fill those holes and make sure people were safe,” Newberry explained.

That said, Newberry said one of the biggest surprises of joining the military was the amount of paperwork.

“You see these commercials of helicopters and tanks, and then it’s a bunch of paperwork,” Newberry joked.

Thanks to his military service, Newberry received many benefits, including the VA loan he got for housing, the GI bill, which funded his associate’s degree, and a host of lifelong skills he still uses in the National Guard and at home. Besides shop class in high school, he said he learned all his construction skills from the Army, which have helped him in life after active duty with basic home projects.

“(The structures we built) were one of the few things in the Army where, when you walk away, it’s still there to show you’ve done something,” Newberry said.

Newberry left active duty after being given a deployment that would have sent him to Germany. That deployment would have disrupted his wife’s career, so he waived his right to re-enlist and took a position with the Oregon Army National Guard.

After leaving active duty, Newberry earned his associate’s degree from Mt. Hood Community College, and is now working on a Bachelor’s degree in Fisheries and Wildlife Science at Oregon State University. To gain experience in wildlife science when he’s not serving with the National Guard, Newberry took a position with the Job Corps and the U.S. Forest Service, but that was delayed temporarily by the Riverside Fire.

Besides the opportunity to work with the Job Corps, Newberry appreciates that his work with the National Guard has allowed him to give back closer to home.
In recent years, Newberry has helped fight numerous wildfires in Oregon and grown closer to the people on his crews.

“(This year), one of my soldiers was from … Chiloquin, near Klamath Falls,” Newberry added. “You get really close. You know their strengths and weaknesses. It’s a lot of hard work, (but) the stories with your friends are what you remember, not how hard the work was.”

“Being in the guard, it’s kind of like being from a small town,” the Tygh Valley native said. “You get to help out where you live. It’s weird. Something always keeps me coming back. I have no hesitation in volunteering.”