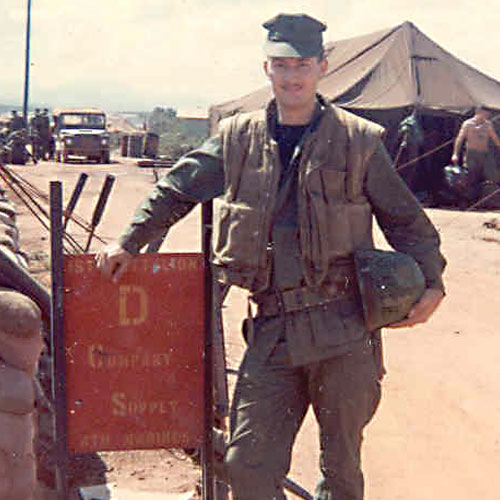 MILITARY WAS GOOD TO A COMPANY CLERK

After graduating from high school in Bend in 1965, Tony Rizzutto gave college a try, but after six months decided it was not for him.

Instead, he chose military service.

“I joined the Marines to get in the Drum and Bugle Corps (but) they said I had to go to boot camp to get an audition,” he said, thinking that his four years of drumming in high school would suffice.

It didn’t and he “flunked” out, Rizzutto recalled.

After boot camp, he ended up in Fallbrook, Calif., and was assigned to serve as a military policeman at a U.S. Navy weapons station where he worked as a gate guard. After three weeks, Rizzutto said he was called into the office of the first sergeant, and when the sergeant discovered he could type, he became the company clerk.

“I had no idea what my future was. I just went with the flow,” said Rizzuto, a Tigard resident since 1974. “I was in Fallbrook for probably eight months and then I had orders for Vietnam.”

But as he was preparing to be shipped over to Southeast Asia, Rizzutto took a language test, asked to translate a make-believe language. He passed the test and joined about 70 others sent to the Presidio of Monterey, California, a U.S. Army installation.

“They just taught us how to interrogate. They didn’t teach us how to talk to people,” he recalled. “I discovered right away when I got to Vietnam when I tried to talk to the laundry gals that I didn’t know anything.”

From November 1967 to November 1968, Rizzutto served as a company clerk with Company D in the First Battalion of the Fourth Marines. When he first arrived in Southeast Asia, he said it was nothing like the tropical heat he had expected; instead, it was the monsoon season where it was both wet and cold. He asked his girlfriend to send him some thermal underwear — and quick.

“I ended up going to Dong Ha, which was eight miles from the (demilitarized zone) and we were there for about six months and then we were moved further south and went to Quang Tri,” said Rizzutto.

As a clerk, he would frequently move up to the front lines to have officers sign papers. While he wasn’t in any firefights, there were some scary times.

“I had shrapnel holes in my tent. We got woke up every morning at 4:30 with rockets because Dong Ha was an air base so the Vietnamese shelled the base every day.”

Needless to say, Rizzutto was as worried as any of his fellow soldiers when he arrived in Southeast Asia.

“I was, and I am, a Christian so I just placed myself into God’s hands and let him worried about it,” recalled Rizzutto. “I told him I was OK if he decided to kill me and he didn’t, and then about a month before I was supposed to come home, I said, ‘Not now.’”

After Vietnam, he married his college sweetheart and the two have been together for more than 50 years.

Rizzutto eventually joined the Marine Corps Reserves and worked at Swan Island for about four months before finishing up his bachelor’s degree in psychology from Portland State University. Later, he joined the U.S. Army Reserves before retiring in 1991.

His eight years in the U.S. Marines ended up getting him the position of staff Sergeant E-6 and he retired from his U.S. Army Reserve career as an E-8 master sergeant.

Rizzutto eventually worked as a clerical administrator for the city of Portland from 1980 to 2004, working for four bureaus before retiring from the city’s water bureau.

He later joined the Marine Corps League, becoming a commandant for the Portland detachment, a job he held for 16 years.

Rizzutto has been with VFW Post 3452 since 2000, serving in every position, including as its commander.

He is also in his sixth year as Pack Leader for the Oregon Military Order of Devil Dogs for the Marine Corps League Department.

His hobbies include photography, playing American Mah Jongg and woodworking, serving as president of the Western Woodcarvers Association, a position he held for 12 years.