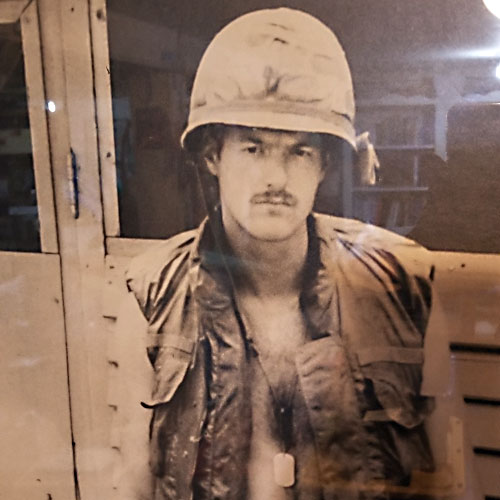 While serving as the chief of surgery at a makeshift hospital at an airport in Kuwait and seeing American soldiers’ horrific injuries, Stiles Jewett was reminded of his time spent as a flight surgeon in Vietnam.

“One thought I had was that war hadn’t changed all that much,” he said.

Jewett, who lives just outside of Wilsonville, served in both the Vietnam War and the Iraq War, where he treated injured soldiers in Kuwait during Operation Iraqi Freedom. He spent 14 years on active duty and seven in the reserves.

Growing up in Chicago, Jewett never thought he would be involved in multiple military conflicts, but he knew he wanted to become a doctor by age 8. After graduating from Northwestern’s medical school and completing a medical internship, he was drafted and shipped to Vietnam. He subsequently stayed in the Army for 10 years.

“(I thought) ‘Gee maybe there is something to be said for staying in the Army: the training experience, travel. Maybe the military isn’t so bad after all,’” he said.

During Jewett’s one-year stint in Vietnam, he was a part of a battalion that would transport cargo and support ground missions. He treated injured soldiers and the native population, some of whom were afflicted with malaria and tuberculosis. Jewett stabilized injured soldiers before they were sent out of the country for more intensive care.

“You focus on what you need to do,” he said. “You’re busy and focused on the patient and the problem in front of you, and less so on how to deal with the stress personally.” Jewett said his battalion was a consistent target of the Viet Cong soldiers, who fired mortars and other explosives at them.

Jewett recalled that his mattress was surrounded by solid steel plates capable of preventing mortar and rocket fragments from harming him.

“It may sound strange, but I almost preferred Vietnam. In Vietnam, when things were exploding, going bang, you knew what they were and how to react,” he said.

After completing his first Army stint in the late 1970s, he never thought he would return to military service, but he was talked into joining the Army reserve in the 1990s and stayed there for seven years. He spent his time outside the military as a surgeon in private practice.

Jewett decided to go back on active duty in July 2001, just two months before the 9/11 terrorist attacks, which influenced U.S. leaders’ decision to begin the Iraq War.

Jewett said he and other leaders intensely prepared for the possibility of the Iraqi government using chemical or biological weapons. He said fear of this kind of attack is the reason he preferred Vietnam. His group wore attire similar to HAZMAT suits, which they didn’t remove for three weeks. Thankfully, he said, such weapons weren’t used.

“(It was) not knowing if odorless colorless gas or substance was going to snuff you out in a matter of a few seconds,” he said. Meanwhile, Jewett said they treated about 90% of injured soldiers during Operation Iraqi Freedom.

They even treated some Iraqis. He was known as “Big Knife,” and his role was to organize the various surgeons, whether they specialized in cardiovascular, neurological, or other surgery types. He also performed surgeries himself.

One piece of wisdom he learned through his service is that “Your adversaries are people just like you are who have been caught up in a situation that’s been brought upon us by our political leaders.” Jewett returned home to cheers and adulation from American citizens. The war was beginning to turn poorly for the United States just as he was leaving, he said.

Though Jewett says both the Vietnam and Iraq Wars could have been avoided, he said his time serving his country benefited him personally, and he even advocated for the reinstatement of a national draft, which he said would promote citizen engagement.

“I would certainly do it all over again,” he said.