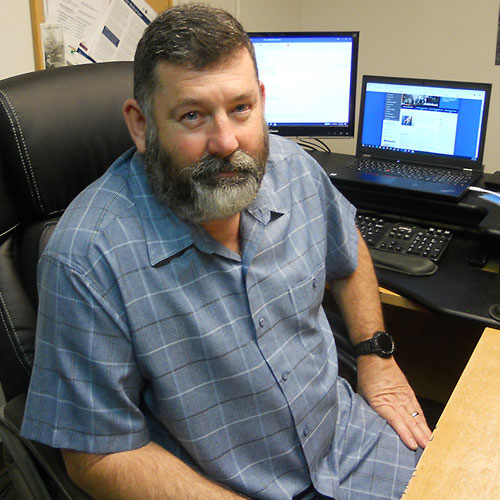 At Community Action Team in St. Helens, Russ Clark is always looking out for his fellow veterans.

Clark, who serves as Veterans Service Officer at the organization, describes a Community Action Team as a nonprofit providing assistance in several ways, including housing, senior care and veteran services.

“It’s kind of a catch-all for a lot of resources,” Clark said.

“Honestly, the reason I did was we were in the middle of a recession back in 1985,” Clark said. “There weren’t a lot of jobs. It was one of the ways to support my family. I had a wife and child.”

After nearly 22 years in the military, Clark said, “I never regretted it. I had a great time — for the most part.”

Clark went to Officer Candidate School in 1987 to become a commissioned officer, ultimately retiring at the rank of major.

His service includes stints at Fort Hood in Texas, Fort Benning in Georgia, Fort McClellan in Alabama, and overseas in Germany and the Middle East.

“I was deployed in Desert Storm,” Clark said, noting he served around six months in Saudi Arabia and Iraq during the Gulf War in the early 1990s.

Clark topped off his career as a military science professor at California Polytechnic State University in San Luis Obispo.

He moved to Oregon after he retired in 2006.

We took our motorhome up here and stayed at an RV park while we were looking for a place to live,” Clark said. “Eventually, we settled in St. Helens because, honestly, it had the best commuting into Portland.”

At the time, Clark had a job in Portland with a tech company, but after it went “belly up,” he said, he began a new post-retirement career in veterans services. In 2013, he began working at Community Action Team, much closer to home.“

On Veterans Day, Clark hopes people can pause and think of those who have served.

“It is a hard road (for those in the military),” he said. “If you’re moving every two-and-a-half years, you don’t really get to establish roots, so it’s a tough life, especially for a family.”

Clark added, “There’s a lot of sacrifice — not only those who died for your country, or those who were injured, but just the sacrifice itself. I gave the Army my 20s, my 30s, and half my 40s. Those are some pretty productive years.”

For young people, though, Clark says the military offers a chance to further your education.

“Basically, you do four years or three years, and you get out with three years of college paid for,” he said. “It’s a great deal, especially for people who can’t afford to go to college.”

As for career opportunities, Clark said, “You can be anything from an electrician, say electrician in a nuclear sub or a ship, to an electrician on a base somewhere — my son joined the Navy — and has been working, basically construction, since he got out of the service.”

Describing his role at Community Action Team, Clark said he advocates for veterans with issues including, disability, pension, compensation and burial concerns.

“One of the things I want them to know is we’re still open,” he said. “We’re open to receive our veterans. We want to do that and make sure they get all the things that they’re entitled to.”

As we observe Veterans Day, Clark noted, “If you look at the United States population, there’s less than 1 percent of us who have served in the military, and those are the people who are really still sacrificing.”