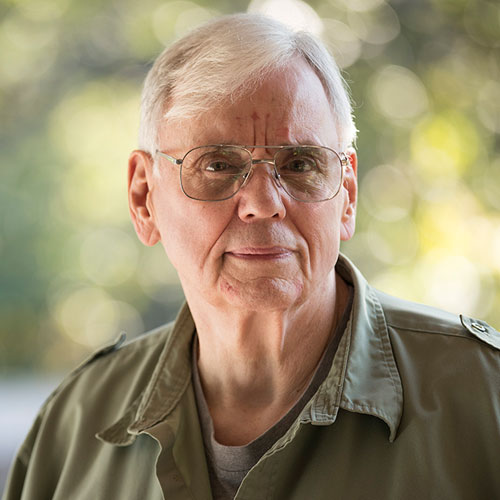 Vietnam veteran Paul Maidel wants to make sure that all veterans are honored with something special for their time in the U.S. military.

To that end, Maidel — who belongs to VFW Post 3452 in Tualatin — makes sure that when he meets a fellow veteran, he can share a “Welcome Home” challenge coin with them, paying tribute to their time in the armed services.

“I don’t only give them a coin, I give them a set of military can openers … which most military people that were in the service in Korea and Vietnam can relate to,” said Mandel, a Tualatin resident.

But he doesn’t stop there, also giving them a clamshell case to carry it in and a clear plastic cover to display on a mantle, reminding them “they served their country.”

Maidel’s own story began on Sept. 1, 1965, when he paid a trip to a recruiting office in California and got pulled in different directions regarding what his specialty — or military branch, for that matter — should be.

“I figured out if I flunk out of the Marines, I’m going to be in Vietnam until I’m dead,” he said. “I decided (going) into the NSA was the best thing to do.”

He ended up serving in the agency in Thailand from June of 1966 to June the following year and later spent six months in Japan.

Then came his next stop.

“I volunteered for Vietnam and NSA needed radio intercept operators and direction finders so badly in Vietnam that I was there the next week,” he said of the tour which landed him in Southeast Asia for a year beginning in November 1967.

Two month later, the Tet Offensive — the largest military campaign of the war that saw Viet Cong and the North Vietnamese forces attack military and civilian centers in South Vietnam — got underway.

“I remember I almost got killed a number of times,” he said. “I got shot (at) by a sniper one night (and) my room was blown up several times with rockets and mortars.”

He said at one point after his first four years of active duty, he went back to Long Beach, California, grew his hair long, reconnected with high school buddies and entered the hippie culture of the time, something he said he now regrets.

Later, he would teach radio code and met his wife from Medford. The two were together for almost 17 years.

“I did a lot of interesting work I couldn’t talk about for 40 years. It was all top secret/classified but now it’s unclassified stuff,” he said.

Becoming a legal clerk in 1974, he then spent almost 16 years as a legal specialist for the Judge Advocate General’s Corps (a branch of the service involved with military justice and military law), the last nine years of his career as a senior legal non-commissioned officer until retiring in 1989.

After retiring, he worked for the U.S. Postal Service as both a letter carrier and letter handler in the agency’s downtown Portland office.

Maidel said welcoming back ceremonies are important to veterans, and in recent years, he has headed up the Welcome Home Coin Project, which was founded in 2011 by the late Francis Betz of Beaverton VFW Post 4617.

When Maidel took over the project and brought it to the Tualatin VFW, he had two more coins struck, one saying, “Welcome Home Vietnam Veteran,” and another saying “Welcome Home U.S. Combat Veteran.” He began presenting them to veterans in 2018.

So important are those coins that Maidel carries at least one Vietnam coin with him at all times in case he encounters a veteran at a supermarket or somewhere else.

“First I read the ‘Band of Brothers’ poem from ‘Henry V,’ and then I read a script that specifically focuses on the purpose of the coin and the person,” he said about the 3,000 to 4,000 coins he’s distributed over the years.

“Usually they get choked up,” Maidel said about presenting coins to veterans. “Some of them even cry.”

Those interested in receiving a Welcome Home coin can contact Maidel at 503-780-2731 or send an email to madpup49@comcast.net.