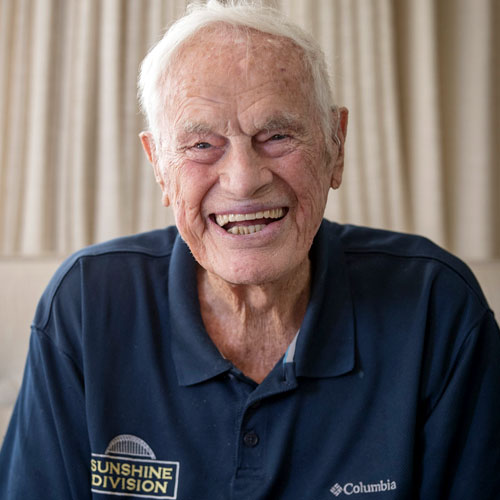 He’s a U.S. veteran of World War II, a Portland police officer and commander, a nonprofit leader, and at 100 years of age, still a humble inspiration to others.

Lewis’ own words say it all: “If you show interest in, respect for, and kindness toward people, it will always be the right thing to do.”

Lewis was born near Mayton in Alberta, Canada, on Aug. 8, 1920, to a family who’d moved there from the United States to farm and find a better life. Facing hardship, they headed back south — only to run out of money in Portland. This was to be Lewis’ good fortune.

As a student at Benson High School, Lewis, like other patriotic boys of his day, sought adventure by joining the pre-war military. Only 16, he was not of legal age, but at 6-foot-3, he easily passed for 18.

After graduating, Lewis was appointed to the Portland Police Bureau as a patrolman. Although he admits applying for the job for the money ($186 a month), Lewis believes the work changed him for the better.

“I grew into the job. I realized there is something good about everyone and that’s why I treated everyone with dignity,” said Lewis.

But before that happened, Pearl Harbor intervened, and Lewis was assigned to the 186th Regiment of the 41st Infantry (“Sunset”) Division, so-named because of its setting-sun insignia. At first, it was assigned to patrol the Oregon beaches from their base at Camp Clatsop (now Rilea). But then, as an already-trained unit, the 41st — also known as “Jungleers” — the was picked as America’s first to be sent overseas, fighting on New Guinea, in battles at Buna, Hollandia and the island of Biak. Lewis commanded the supply of small arms ammunition to front-line troops, often escaping serious injury by seconds or inches.

On Biak, Lewis’ ongoing cases of malaria and hepatitis caught up with him. He was ordered home and returned to the states aboard the transport USS Republic. But after serving in harm’s way, Lewis’ life of public service was just beginning.

After returning to Portland, Lewis resumed his police career and married Janet, his longtime love. Together they raised their two children, Diane and Doug, in a Southwest Portland home where Lewis still lives.

Lewis’ always-positive outlook and integrity resulted in his assignment to the Portland Police Bureau’s Safety Education Unit. Many Portlanders still remember warm and kind “Sgt. Lewis” teaching them how to drive. But perhaps the most remarkable aspect of Lewis’ duties was his role as the commander of the famed Sunshine Division, which provides food to the needy, a position he held from 1963 until his retirement in 1973.

After retiring, Lewis worked as head of corporate security for the former Northwest Portland-based ESCO Corporation for 10 years. He is most proud of minimizing violence and property destruction during its first strike thanks to the good relations he’d established with workers.

“I talked to every one of them, and said I was also a union member, a member of the Portland Police Association,” said Lewis.

Decades after his retirement, Lewis still tirelessly contributes to his cherished Sunshine Division. This past summer, just before his 100th birthday, Lewis raised more than $125,000 in contributions by traversing many miles on the Duniway Track.

Lewis’ overwhelming kindness has helped him smooth over any bad feelings remaining from WWII. He long-ago buried any hatchet that may have existed and now works to return Yosegaki Hinomaru (good-luck national flags carried by Japanese troops into battle) to their original families. This effort resulted in a 2015 interview on CBS’ Sunday Morning program.

But perhaps Lewis’ greatest service is to the thousands of friends he has gained over a century, all of whom feel very close to him. His ready grin, infectious laugh, crushing handshake and enduring wisdom have endeared him to everyone he meets. To meet Lewis is to like him.

Describing him as “one in a million” is a vast understatement.