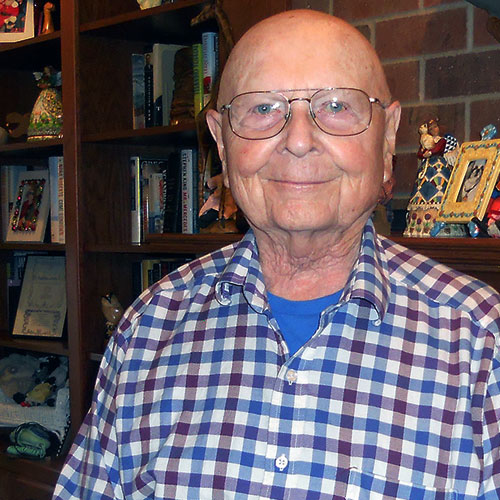 Eighty-eight-year-old Keith Weir lives on Sherwood’s outskirts, at a high enough elevation that he can enjoy a breathtaking view of the Willamette Valley from his property.

Weir also has an interesting tale to tell — from his college studies to a stint in the Korean War, when he was stationed in Busan, South Korea.

Weir was born in Chicago about the time John Dillinger was shot, and indeed, his birthplace was just a couple of blocks from the Biograph Theater where FBI agents killed the gangster.

A traveler throughout his life, Weir lived in Deerfield, Illinois, as a child and also spent time in Iowa, where he enjoyed summers on his uncle’s farm.

Things didn’t quite work out as planned, though.

“What I learned after about the first year at Iowa State (University) was that if you want to be a farmer, unless you want to be a hired man, you had better have a few hundred thousand dollars to invest in a farm, which I didn’t have,” Weir said.

So Weir left Iowa State to go into business administration. At about the same time, the United States joined South Korea and United Nations forces going to war on the Korean Peninsula.

After a short time studying business administration at Washburn University in Topeka, Kansas, Weir realized it wasn’t working out, and he started thinking about volunteering for the military.

“I figured I was going to be drafted anyway,” Weir said. “I volunteered on Friday, and Sunday, they called me and said to report Monday morning. I went to Fort Sheridan (in Illinois) that Monday and they started processing me.”

Before being sent to Korea, Weir spent part of his service at Fort McClellan in Alabama, in the U.S. Army Chemical Corps.

“They didn’t know what to do with us,” Weir said. “So they said, ‘Go out here, take these rakes, and go out and rake rocks.’”

After slogging through a hot Alabama summer, Weir became a company clerk because he could type — even if it was just 30 words per minute, he admitted.

“It was a great life, but it was rather boring, and I started college (at night) at Jacksonville State,” he said.

After getting a chance to write for a newspaper aboard the ship, Weir eventually landed in Busan (then more often spelled “Pusan”).

“They had me assigned to be in the transportation truck battalion,” he said. “They were training Koreans to drive trucks.”

“In Korea, we had all sorts of crazy incidents,” he said. “I didn’t shoot anybody, and nobody shot me, but I got to know South Korea pretty well. Sometimes on the weekends, we had trucks and Jeeps (and) we would go for a little ride.”

After leaving the military, Weir moved to Oregon, eventually winding up in the Sherwood area.

Asked whether he would advise young people to join the military today, Weir said, “My advice is, one, take part of the Nike slogan and ‘Just do it.’ If you plan ahead, and then just do it, it coordinates.”

Weir added, “You should serve your country in some way. It doesn’t have to be the military. It could be in your neighborhood.”