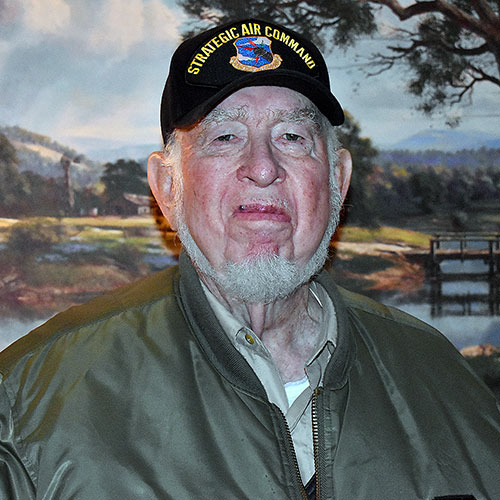 Prineville’s Donald Tuter was born in Brookline, Missouri, in 1934 during the throes of the great economic depression.

When he was 5 years old, he remembers the day the 32nd president of the United States, Franklin Delano Roosevelt, gave his “Day of Infamy” speech, the day following Japan’s strike on the U.S. Naval base at Pearl Harbor.

“It’s frightful to a little kid to have that kind of information,” Tuter said. “From that time on, my dad and several of my uncles all were drafted into the military, and I am thankful not a one of them died in combat.”

In June 1953, Tuter had just graduated from high school and a neighbor suggested he join the Army National Guard in Kansas, saying that if he did so, he would help Tuter get a job with the Union Pacific Railroad.

“That became my military career. I became a grunt soldier and also a greenhorn on the Union Pacific Railroad,” he said.

Tuter served with in the U.S. Army’s infantry for three years and four months. At that point, the Korean War was nearly over, but he still earned Korean War status because he joined before the war was over.

In October 1956, his brother, Forrest, and a friend from high school joined the United States Air Force. They spent the first five months of their service at Lackland Air Force Base in San Antonio, Texas, and also in Amarillo, Texas.

The Tuters’ technical training enabled them to work as mechanics on the reconnaissance RB47 bomber, where they served more than three years. They made trips to Japan for temporary duties, while their planes were surveying the Ho Chi Minh Trail, and before the great offensive that wreaked havoc in Vietnam.

“At times, I thought ‘We are just lowly mechanics back here, keeping the planes flying,’” Tuter said. “And the officers got all the accolades and apparently got the best treatment. Then I realized, they didn’t shoot at us. Those officers had to take the brunt, and it made me even more proud to be where I was in supporting those planes.”

One summer, the Tuters were assigned temporary duty in New Finland where they were assigned to several Boeing KC-97 Stratofreighters, prop-engine planes used for refueling jet fighters and bombers. In 1960, they went on a detachment to eastern Turkey near Syria. They were supporting American planes there, unaware that they were considered “Ike’s Spies,” referring to U.S. president Dwight David “Ike” Eisenhower.

“We were over there flying our reconnaissance planes to see what the Russians were doing,” Tuter said.

While in Turkey, the airbase where they were assigned became the great shipping point to send war supplies to the middle east, Iraq and Afghanistan. It was located a few miles from the Mediterranean Sea and supplies from ships were unloaded and flown from that base north to the war zones.

“While we were there one day, one of the airmen said, ‘Come look at this.’ We all ran outside our hangars and looked up, and almost disguised by the clouds was one of the big Russian Bison bombers, which was apparently photographing our airbase.”’

He added that while they rise much in the ranks with the Air Force, they were still expected to do a great deal.

“But not anything like the sacrifice of our what I call ‘mud Marines and dog-face soldiers’ that were out there in the dirt keeping America free,” Tuter said, referring to U.S. combat service personnel. “I will always be thankful, and I really believe the Air Force gave me the equivalent of a junior college education and they showed me two-thirds of … the world. I will always be thankful for that experience. I would certainly go back today and do that again, except I am knocking on 86 years old.”

Tuter is currently a member of the Prineville Band of Brothers, serves as chaplain for the organization, and also on the Honor Guard. He is proud of his three adult children and wife, Joyce, with whom he has shared 60 years of marriage. He also has nine grandchildren.

“I love the United States of America, and I am proud of my service,” he concluded.