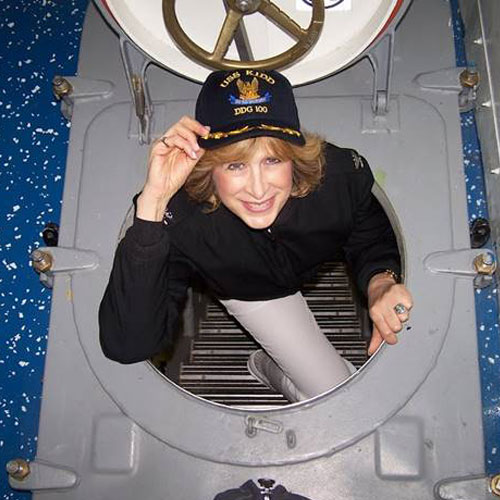 EXPANDING OPPORTUNTIES AS A NAVY NURSE

That’s why she joined the United States Navy and went on to work as a nurse for 30 years.

Labhard, a Lake Oswego resident who was born in Maryland, served as a nurse in the Navy from 1983-2014 and rose to the rank of captain prior to her retirement.

“I could stay in (the Navy) as long as I wanted and get out whenever I wanted,” Labhard said.

Labhard said that every year of her service, she attended two to three weeks of active duty training, where she worked with active duty nurses. Other than training, however, she was never called to active duty.

During her time in the military, Labhard worked at Navy hospitals in the United States and abroad, and also worked out of aircraft carriers, helicopters, submarines and tents.

For her annual training, Labhard served as part of the medical staff on the USS Lexington while pilots were getting their qualifications for landings and take-offs.
“Most of the training exercises went well, but there were some incidents and I was thankful to be able to help,” she said.

During her final night of training, Labhard participated in an emergency situation.
“As we were still at sea and my duty had ended, I was placed in a small plane and shot off the catapult going approximately 150 knots (170 mph),” Labhard said. “It was one of the most terrifying, yet gratifying, moments of my life.”

While serving with the Navy in the Philippines, Labhard remembers staying in tents during a humanitarian mission. They brought supplies to area hospitals and clinics, while working with the local medical community to provide care for their people.

During her time in the Navy, Labhard said she encountered many broken bones and burns. In her role as a rehabilitation nurse, she helped people gain back their quality of life.

“I think it’s important for people to have a quality life so they can return to their duty or their family,” Labhard said. “It’s a variety of medical needs, and part of mine was leadership and training the corpsmen.”

Labhard’s work with the hospital corpsmen — enlisted medical specialists and new nurses — included teaching them how to take off casts and catheterize people, among other medical tasks.

Labhard also served in leadership positions during her time as a Navy nurse.

She was in charge of many different units, working as a department head, training officer, clinical specialist — among other titles — and serving as a command managed equal opportunity manager. In that role, she was responsible for ensuring that the ethics of the command were carried out so people were treated fairly.

“Labhard was the point of contact for Equal Opportunity and Sexual Harassment issues within the command of approximately 700 Selected Reservists and conducted and evaluated the annual DEOCS Command Climate Survey,” her biography reads. “For her dedication and meritorious service, she received the Meritorious Service Medal.”

During her time as a Navy nurse, Labhard also held a civilian job as a nurse at the Shriners Hospital for Children in Portland, where she still works four days a week. And in the middle of juggling so many duties, she earned her master’s in nursing in 1993 from Oregon Health & Science University.

Labhard also serves as the reserve nurse provider for Navy ships during the Upriver Cruise that’s part of the Rose Festival every year.

After finally retiring from the Navy, Labhard looked back on a career that allowed her the opportunity to do things regular nurses would never get to do. She also learned about her shipmates and said they would all give their lives for one another.

“It was the best of both worlds. I had my civilian job, but as a reservist, I was able to fill in for active duty,” she said, adding that she was grateful to expand her nursing opportunities “and at the same time, serve my country.”
Labhard has lived in Lake Oswego for the last 32 years with her husband, Michael.