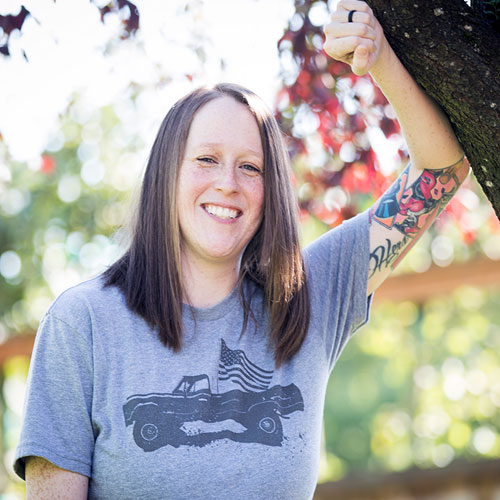 RECOGNITION AS A FEMALE LGBTQ VETERAN

On the second night of Ranae Jones’ deployment to Kandahar, Afghanistan, she was on a Skype call with her wife, Jacquie, when one of the least-welcome sounds came over the base’s speakers.

Jones wasn’t harmed in the attack, but her wife said the experience was her introduction to the anxiety that spouses of soldiers have to deal with constantly when their loved ones deploy.

“When you’re there, it’s almost like a light switch for your emotions,” Jones said. “When you’re in a stressful situation, it has to be off. If you think about everything you’re missing, or that you’re never going to see them again, or you don’t know if you’re going to die in your country, it can be overwhelming. You can lose focus on what you’re there to do.”

Jones, a medic with engineer battalions in the U.S. Army Reserve between 2010 and 2017, spent six months in Afghanistan during a one-year deployment.
As a medic, staying focused could be the difference between life and death for a fellow soldier, she said.

Jones was lucky to never see combat with her unit, which was tasked with going into combat zones to deconstruct military structures in 2014 as United States troops were withdrawn from the country, she said.

Now, Jones lives in Hillsboro with Jacquie and the couple’s baby son, who was born in January. She works as a deputy at the Columbia County Sheriff’s Office.
She said she joined the Army Reserve simply because the financial and educational benefits were appealing. She also wanted more activity in her life. When she first joined, Jones was 21 years old, working as a respiratory therapist in a hospital in Southern California, and “wanted something more.”

“It cemented who I was as a person,” she said. “You kind of have an idea of who you are as a person when you’re 18, 19, 20, but you really get a sense of that when you’re meeting so many different people. Who are you? What do you stand for?”

But when Jones joined, she couldn’t be honest with her unit about her sexuality because the Clinton-era “Don’t ask, Don’t tell” law that barred lesbians, gays and bisexuals from serving in the U.S. military if they acknowledged their sexual orientation was still in place.

The Don’t Ask, Don’t Tell Repeal Act was passed in 2010, but the act didn’t remove discrimination from the military. It wasn’t until summer 2013 — months before Jones got married and deployed — when a ruling by the U.S. Supreme Court allowed military benefits programs to be extended to same-sex spouses of service members and veterans.

“It was a big deal for us,” Jones said. “If I died (before that statute was in force), she would have gotten nothing.”

Although elements of systemic discrimination against LGBTQ service members was removed just before she deployed, Jones still faced gender discrimination within her own unit.

“I had a hard time with the fact that I was the only female medic in my unit,” Jones said, adding that it was hard to establish the camaraderie soldiers usually have. “There was a male colleague who was the same rank as I was, and he was just downright hostile to the face that I was doing the same job that he was.”
Back home, Jones said her experiences have shown her that female veterans are often overlooked.

“Say I park in a veterans parking spot at Home Depot or Lowe’s, I get looks,” Jones said. “A lot of people assume it’s my husband. I have veterans plates on my car, and I get, ‘Oh, did your husband serve?’ and I’m like, ‘No. I did.’

“The spotlight is missing on our female veterans and we have so many more veterans that are females today than we ever have. I think it’s sad.”

She said that while there are many similarities about how male and female veterans experience life after service — an appreciation of the little things such as fresh fruit or feeling hyper-alert in crowds — there are a lot of differences too.
“The biggest thing is just being willing to communicate, whether it’s talking or listening,” Jones said.