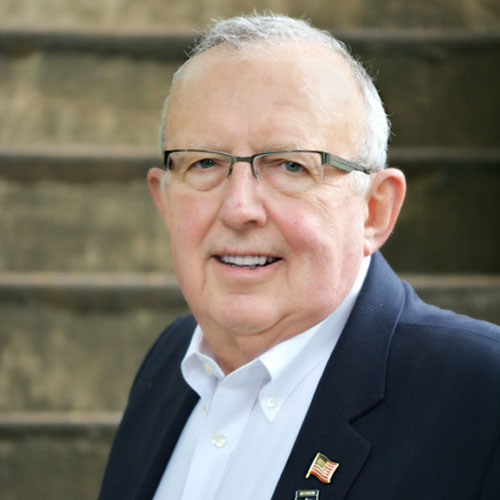 Michael Perrault is 74 years old. He went to college, served 20 years in the United States Army, and owned and operated his own business.

However, despite a wealth of knowledge, experience, and wisdom nearly 75 years can get you, he’s still learning – and he says that can only help him be better.
“In the past, I’ve been ready to stand up for things I didn’t fully understand,” Perrault said. “But through reading and talking to people, my eyes have been opened to a lot of things and made me a more understanding and compassionate human being.”

Born in Worcester, Massachusetts, Perrault’s parents moved the family to Chappaqua, New York, a small town 30 miles north of New York City when he was 12. He remained there throughout high school, where he operated mostly the way kids do, studying, spending time with family and friends, and playing sports. But while many interests, it was the military that did and always had piqued his interest.

“My thing growing up was the military,” he said. “World War II had just ended, and everything we read and saw talked about the returning heroes. Those were truly my heroes, and because of that, I wanted to be in the military since day one.”

Perrault chose to attend the same college his dad had attended, Norwich College in Vermont, a military school credited with founding the Reserve Officers’ Training Corps. After graduating, he went directly into the Army as an officer, commissioned as a second lieutenant. To Perrault, he’d made it.

“I’d fulfilled my lifelong dream,” he said. “I’d truly made it.”

After spending time in Vietnam as an Armor Officer, Perrault returned home, but not to the response he’d ogled at as a kid. There was little if any fanfare for soldiers returning from Southeast Asia, and in fact — despite having an inkling of what to expect — it was quite the opposite. He was yelled at, berated, and even spit on by young children at the direction — sometimes — of their mothers. He wasn’t the “hero” he’d always wanted to be, but rather a “baby killer” in the eyes of many of the people he’d enlisted to defend.

“Reading about it was one thing, but having it happen to you personally, is kind of stunning and shocking,” he said. “Here I am growing up in Massachusetts, and soldiers were our heroes. Now I’m back and being treated that way, and I was like, ‘Wow, that’s a 180-degree turn from my experience as a kid.”

Remaining in the Army, Perrault then worked in Human Resources as part of the Adjutant General Corps before being recommended for an organizational development consultants program where he’d spend a decade laying the foundation of what would be a 30-year career.

“It was really the gift of a lifetime.”

Despite being in line for a promotion to a rank of full colonel, he retired from the service, partly at the request of his wife, Pilar, a native Columbian and U.S. citizen whom he’d met at his friend’s wedding. As a result of his organizational development experience, Perrault had little trouble finding a job.

“When I left the military, I walked out, and the next day I was employed by a consulting firm in Los Angeles,” he said. “I mean, it was that day.”

That company was Decision Dynamics Corporation, where he’d spend the next 10 years. From there, he started his own business, Advanced Teamware, later sold that, then worked for Xircom and Intel before spending a decade managing his new consulting company, Perrault Consulting Group.

He and Pilar have been married for 48 years, have three sons (two of which have served in the armed forces), and are now enjoying the fruits of their nearly half-decade together. They’ve recently taken to the recreational vehicle experience, and Perrault keeps current with the world’s ongoings by way of books and discussion groups consisting of old friends and colleagues. Like most, he has concerns with recent developments in this country regarding politics and civil unrest, but he remains optimistic that we will persevere and, as a country, come out the other side better than we were before.

“Certainly, these are difficult times, but we’ve been through similar things before, and I believe we’re actually handling things better now than we have in the past,” Perrault said. “And I think we’ll handle it and be better for it in the end.”

And now, more than 30 years removed from the military life he sought as a kid, how does he feel about the role that the Army played in his life, along with what it can mean to young adults going forward? Pretty darn good.