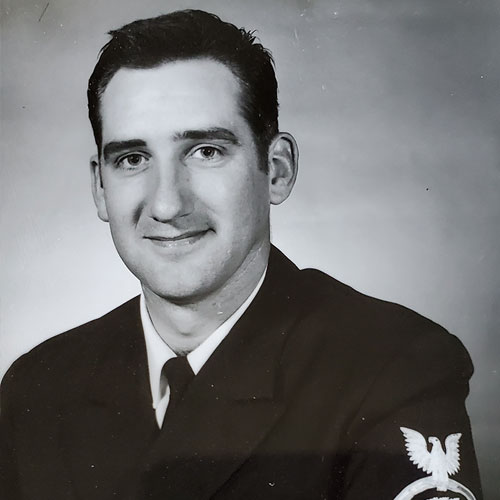 At age 17, Colton’s Lonny Johnson was headed down “the wrong path.” But one happy accident and 64 years later, his rearview mirror is filled with images of a successful career, a long marriage, and a large family.

Johnson is a U.S. Coast Guard veteran, who served amid the Vietnam War, was part of one of the largest drug busts in West Coast history and retired as a senior chief petty officer. But he never even intended to join the Coast Guard.

When he was a junior at Colton High School, Johnson was mourning the death of his brother and spending many days drinking, smoking and throwing pencils at the ceiling during school. He needed a change. So, one day, while sitting in Mrs. Brown’s English class, Johnson announced his summer plans: to join the U.S. Navy.

Needing parent permission to join, Johnson talked his dad into signing off. Then on June 24, 1957, Johnson and his buddy went to the federal office building and stepped into the elevator.

“I don’t know which one of us pushed button 3,” Johnson said. “We were supposed to push button 2. We pushed button 3, and the doors opened up, and there they were — a bunch of sailors.”

The boys indicated they wanted to submit their paperwork and join.

“So, we joined, and it’s probably the best mistake I ever made in my life because it turned me around.”

Johnson first served as a radio operator aboard five different ships before moving into an intelligence role and then working in drug law enforcement. During his time in the service, he traveled all over the United States including Governor’s Island in New York City; Kodiak, Alaska; Seattle, Washington; and Hawaii. He also spent time in the Philippines, Japan and China.

In 1968, Johnson traveled to Washington, D.C. The year was filled with turbulence much like 2020, complete with a pandemic, riots and violence over racism, and a presidential election. There, a gunshot rang out and the crowd began to gasp and yell.

He found himself back to back with Nelson Rockefeller, the 49th governor of New York and at the time a liberal/progressive candidate facing off against, and eventually losing to, Richard Nixon in the Republican presidential primary. He would go on to serve as the 41st vice president of the United States under Gerald Ford.

Johnson says he is proud to have protected Rockefeller that day.
In 1969, Johnson served as an honor guard for President Dwight D. Eisenhower’s funeral.

Down the road in 1977, when Johnson was working in drug enforcement at his office in Seattle, Washington, he received a call about a common fishing hole on federal land in Bandon, Oregon that had suddenly been fenced off.

He visited the site, which butted up to 500 acres of land recently purchased by Arthur Allen. Eventually Johnson would take part in busting Allen and 18 others involved in illegally importing eight tons of marijuana.

Johnson says that’s the story he tells his grandchildren most often when they ask him what he was up to during the Vietnam War.

Most of his adventures did take place during the war, but Johnson says he never really went in to fight. For that reason, Johnson has been unable to join the Veterans of Foreign Wars organization, though he is a happy member of the American Legion.

Following his retirement from the Coast Guard, Johnson went to college and joined the Clackamas County Sheriff’s Office and then Molalla Police Department before taking on the Chief of Police job at Warrenton.

All the while, Johnson kept his Colton address and has spent the last 20 years with family at the 18-acre rural homestead where he was born. Johnson has been married to Sharon Lee Beck for 57 years and has five kids and 23 grandchildren.

“I have a sweatshirt I just got in the mail the other day – says, ‘I was born and raised in Colton. It’s where my story begins,’” Johnson says.

Nowadays he spends his time in Colton “just goofin’ around.” At 81 years old, he plays basketball, volunteers as a ham radio operator with Clackamas Amateur Radio Emergency Services and flies model airplanes in Central Oregon.