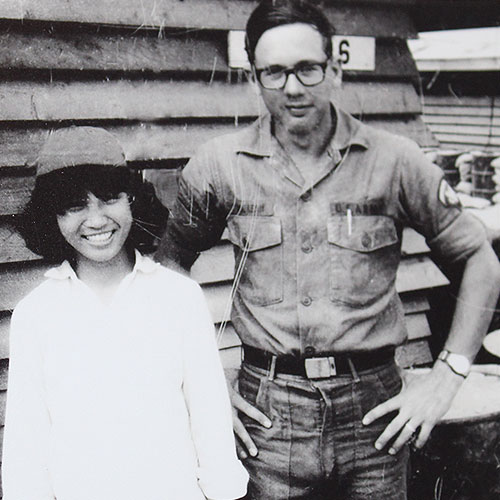 During the Vietnam War, Larry McLean had the nerve-wracking job of keeping track of ground artillery fire so American planes wouldn’t fly into it.

In 1966, after getting a draft notice, he enlisted in the Army and received 14 months advanced training at Fort Bliss, Texas, as a forward observer. His job was to spy on enemy forces and relay back intelligence.

When McLean arrived in Vietnam the summer of 1967, his assignment was switched to the security force in the 79th ordinance detachment on Tan Son Nhut Air Base outside of Saigon.

His sergeant described the job, saying, “You guys are our early warning system. While they’re shooting at you, we have time to get ready.”

After 4 1/2 months, McLean was sent to Hon Tre Island, five miles off the city of Nha Trang on the bulge of South Vietnam. He was assigned to the 97th Artillery Group, which serviced air defense missile sites.

“For the next eight months, I got to do my job. There were six enlisted men and four officers in our detachment and we worked with the Air Force in a 200-mile radius. All the units in our area would call their artillery fire coordinates to us, and we would plot them on a map. We would relay the information to the Air Force so they wouldn’t fly their planes into it,” he said.

It was a stressful job, especially since they had to go through a switchboard and communications were not ideal. McLean’s wife, Doris, noted, “He’d say a prayer after every message, hoping they got everything right, or they would blow up the wrong thing.”

Viet Cong, posing as local fishermen, would come out at night, and a few snuck ashore with mortars. “If the Navy shot and sank their boats, we’d have stacks of bodies on the beach,” he said.

During the 1968 Tet Offensive, McLean said they rode to the top of the island with Air Force personnel “loaded for bear,” but luckily, weren’t attacked. “We could see them and were under red alert for two weeks. What saved us was the North Vietnamese didn’t have a navy,” he said.

On Hon Tre Island, the men would see planes spraying agent orange, and the chemical would get into their water supply and other areas. “Afterward, there was not a bit of foliage left on the island,” he commented.

“That’s why I can’t see, because of agent orange and an eye virus,” said McLean, who is now 74, almost totally blind and walks with a white cane. His Vietnam medical records were lost, but he said he was given silver nitrate drops to put in his eyes, and within six months he started losing his eyesight.

Before that, his eyesight was good. He recalled the day an F-46 phantom jet buzzed the island. “I could see the dial on the watch of the pilot – that’s how close he was,” he said.

After his tour was up, he spent nine months in Key West as the training non-commissioned officer for the unit. He was honorably discharged with the rank of Sergeant E-5, or “buck private.” Back home, he worked as a deputy in Crook and Jefferson counties until 1987.

Now living with hearing and PTSD disabilities and blindness, McLean said if he could do it all over, he would still enlist. “We’re a service family,” he said, noting his dad and uncles were in World War II, and his three sons and daughter were all in the military.

He attends a Madras PTSD group of 6-15 veterans, and the VA sent him to the blind rehab center in Tacoma, and provided him with a talking cell phone and reading machine.

Today, McLean enjoys hearing audio books, playing Indian flute music at nursing homes, and black powder shooting.
“I enjoy the shooting, but the people around me don’t enjoy it too much,” he joked.