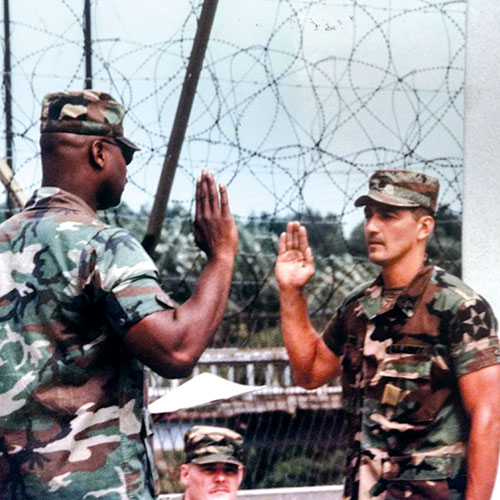 AN EXPERIENCE TO RELISH

There was a void in Greg Perez’s life, created at the end of the Vietnam War when friends were drafted to serve, but he wasn’t.

The motivation to get involved would later lead the Canby man to a 24-year career in the U.S. Army, a career that saw him travel the world and help fill the void that he’d felt so many years earlier.

“I felt a void in my life because when they were still drafting (during Vietnam), when I graduated from high school, I didn’t get drafted,” explains Perez. “I always felt I didn’t do my part and carried that in my heart. I need to be part of the picture to help others, to keep our freedom, to let people protest. I’m okay with that and feel that’s our right.”

Perez joined the U.S. Army on April 3, 1983, and would spend nearly the next quarter of a century at many posts across the globe. It was an experience he relished, noting, “If they would take me back right now, I would go.”

The original plan was to do a three-year hitch to see what it was all about. He worked in air defense weapons systems, and after the three years were up, the Army dangled the carrot in front of him: $16,000 for another six years. That inducement prompted Perez to embark on a military career that would last until 2006 when he retired.

“I decided to stay in and did other occupational specialties,” he says, noting that he was able to “kind of dictate the rest of my career. Not everyone is able to do that.”

“I needed the military guidance in my life,” Perez explains. “It has made me a much better person and more well-rounded. I wouldn’t give it back.

“I served in Korea, Germany, all over the place,” he adds. “The traveling was amazing. And my wife and I traveled a lot before the pandemic because I wanted her to see these places I’d been.”

But there were moments when he was reminded of not only the void he’d felt earlier in his life but the impact of his military service on his family.

“One thing that breaks my heart — my daughter told me one time that I wasn’t there for her,” he says of his military service. “I broke down and realized she was absolutely right. It was out of my control that I couldn’t be there. That was a tough realization.”

But time has rolled on, healing has been part of the process, and when Perez reflects on his time in the U.S. Army, it’s easy to hear the enthusiasm in his voice. He points to the diversity he encountered during his service, working with men and women of all nationalities and opinions.

“We all had something in common. We all wore green,” he says. “There was no color. There was none of that. Being able to be around everybody and have a conversation like we’d known each other for years. We were brothers-in-arms. We were brothers. That’s just how we looked at it.”

Being a Latino, Perez offered a unique perspective on what that meant during his time in the service.

“Maybe I just had a good experience that way, but that’s what I experienced,” he said. “Being Latino, the government forms you filled out always had a box for ‘Latino’ or ‘Other’ on it. I always checked the box for ‘Other.’ I didn’t consider myself Hispanic. That was a government term. I always wrote in that I was Mexican because that was my background. I actually think it helped with promotions.”

“I remember that,” he said. “We were out in the middle of nowhere, and it was back when the terrorist stuff was going on. They let us grow our hair a little longer to blend in with the community better. It was an interesting thing to be doing at a time when everyone was trying to hurt everyone. That just didn’t make sense to me.”

He also served on the Korean DMZ detail, a task he says “meant the world to me to serve and protect democracy.”

Eventually, the military career wound down, and Perez admits that he had difficulty adjusting to people when he got out.

“I stayed away from people for about seven years,” Perez said. “Got home and stayed home — didn’t do anything. It’s not an easy adjustment for anybody to retire.

“Overall, it (U.S. Army experience) was absolutely a good experience,” he concluded.