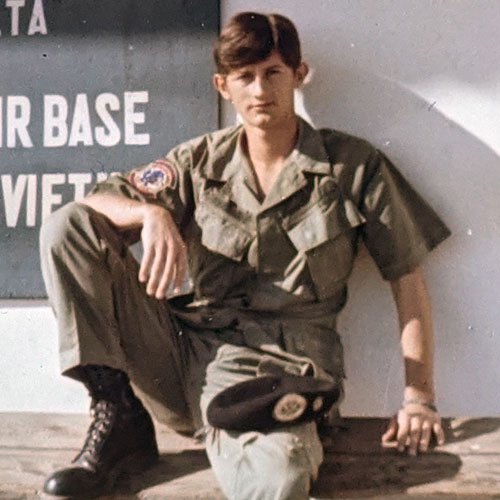 COORDINATING COMMUNICATION DURING THE VIETNAM WAR

When Duane Freauff was working as a radio operator during the Vietnam War, it wasn’t always easy to hear the messages that came through.

“The hard part was hearing stuff because of the static, and sometimes the noise from the helicopters,” he said, recalling his time stationed in the Mekong Delta with the U.S. Navy. “A lot of people wanted to know, ‘What did they say? What did they say?’”

Freauff joined the Naval Reserves after graduating from high school in 1968. He was on a two-year commitment with the Navy and didn’t expect to be called to Vietnam. However, he received orders for active duty in December 1969.

After training at Naval Base Coronado and in Imperial Beach, California, Freauff was sent to a helicopter squadron in the Mekong Delta, where he worked in the communications department. As a radio operator, he worked with three machines and communicated in cryptonic code.

“Some of the helicopters had scramblers in them where you could talk normally, and it would sound scrambled everywhere, except for the person that received them,” he said.

The cryptonic code would change daily.

“It always would help to confuse anybody that shouldn’t be listening,” Freauff said, recalling how he used the phonetic alphabet to communicate. “Sometimes the radio would be quiet all day, and sometimes it was very active, whether they were out flying missions or Army helicopters were getting shot down, so our Navy helicopters were going out to assist and medevac people out.”

For Freauff, the most difficult part of his time in the Navy was losing fellow service people.

“We lost pilots through the course of my year,” he said. “You can’t go into a war zone, whether you shoot people or not, not having it affect you.”

Freauff was discharged and returned to Oregon in April 1971.

Since leaving the military, Freauff has worked as a logger, handyman, Christmas tree salesman, and in real estate and commercial fishing.

Freauff moved to Estacada in the late 1980s because his brother lived nearby. He appreciates volunteering in the community through the St. Vincent de Paul program at St. Aloysius Church.

“I’ve met some really nice people here,” he said.
Freauff added that he’d noticed more of the impact of his time in the Navy later in his life.

“When you’re in your 20s, a lot of things just kind of run off your back. When you get older, it means more to you,” he said. “It makes you grow up and takes you away from home.

Who knows how different your life would be?”

Using the GI Bill, Freauff earned a degree in business from Southern Oregon University in Ashland.

“That influenced my life quite a bit. I still know friends from college. We still get phone calls all the time. When my house could have burned down in the (Clackamas County) wildfires, I got more calls from people I haven’t talked to in years,” he said.