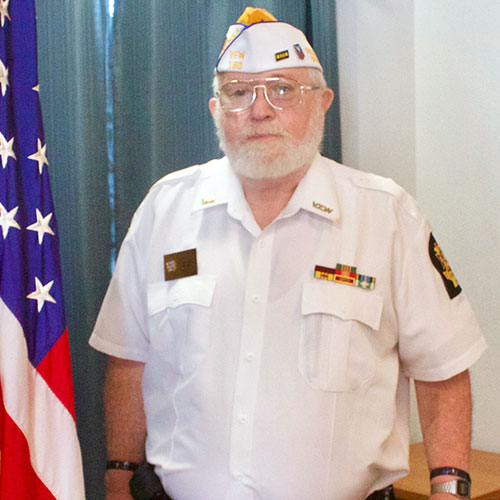 Bob Dooms always had a passion for electronics and working with his hands — two things that eventually led him to enlist in the military.

“I saw it as a way to further my professional goals,” said Dooms, a Gresham resident who has lived in Oregon for almost four decades.

Dooms was born into a military family in Ashland — his grandfather was a World War I veteran who served as a medic in France while his father served for 24 years, primarily stationed at Pearl Harbor. Luckily, his father was on assignment when the 1941 attack by the Japanese kicked off American involvement in World War II.

As the son of a military man, Dooms lived all over the country as he grew up. Eventually, his family made its way back to Ashland in the summer of 1964, where he completed high school. His love of engineering at first steered Dooms toward college to study electric theory.

“I had a passion for science and engineering, but I wanted to work with my hands and see the equipment firsthand rather than study it,” Dooms said. “So I enlisted into the Navy in the fall of 1967.”

As an 18-year-old, Dooms was trained to serve as a radar electrical technician. The majority of his service was spent aboard the USS Ticonderoga, an aircraft carrier that was built during World War II and was still very active during Dooms’ service in the Vietnam War.

Upon first boarding the Ticonderoga, he was put in charge of the supply schematic division where he helmed a crew of almost 60 because the ship already had its technician roles filled. Eventually, he made his way back to working with the radio systems and navigation. He served as lead maintenance technician, fixing any of the complicated systems that inevitably broke down on a ship of that size.

“Every day was different. There was always a new challenge to take on,” Dooms said.

The ship’s main role during the war was scanning for submarines lurking in the waters around Vietnam, though there were several high-profile moments that Dooms saw firsthand.

One of the most tense situations for Dooms came when the Ticonderoga spearheaded the mission to recover the Pueblo, an American spy ship that was seized by North Korea. The situation never escalated beyond posturing and the aircraft carrier returned to its role in the Tet Offensive.

“We were the lead ship in the armada, and basically we sat for days waiting for North Korea to shoot at us,” he said.

Another task sent him to John Hopkins University at the behest of the military so he could take a three-month course investigating a new tracking system — an early prototype for what would later become GPS.

After the war, Dooms and the Ticonderoga helped recover the Apollo 16 capsule after it splashed down 200 miles off the coast of Christmas Island in 1972, that following its mission to the moon.

“On the day of the recovery, I went to the top of the tower, popped open a hatch and took pictures of the capsule as it came down with its chutes through the clouds and into splashdown,” Dooms said. “We got to look inside the capsule.”
During his service he was also able to explore and visit new places — including two trips to Hong Kong, Japan and the Philippines. During those breaks, he loved to bring his camera and find tucked-away places.

The final stop for Dooms’ six years with the Navy came at the White Sands Missile Range, a testing area in the New Mexico desert. While he was there, however, an accident led to his medical retirement from the military.

On his way to go hunting, a friend’s shotgun got tangled in the car and accidentally discharged, hitting Dooms in the face and chest. A plastic surgeon was able to sew him back together with few scars, other than damage to his right eye that has left Dooms with an eyepatch.

Dooms returned to his wife in Oregon and earned a master’s degree. He moved to Gresham 12 years ago and worked three decades for the Bonneville Power Administration. He currently serves with the Gresham VFW, where he is the post’s adjutant.

“I learned so much with the military and was able to explore ideas and places I never thought I would be able to,” Dooms said.